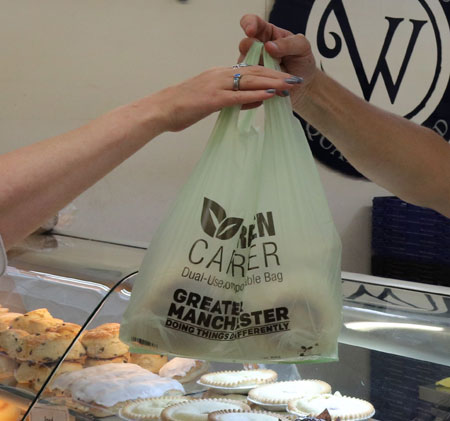 The move began this week with the launch of compostable plastic bags intended to replace non-biodegradable bags of the kind which are causing widespread harm to the environment.

Cllr Alison Gwynne, the Council’s executive lead for the markets, explained: “Our new-style ‘green bag’ is made from renewable plant-based ingredients, from sustainable sources, and it’s 100% biodegradable. You can re-use the bags as kitchen caddy-liners and they can go in the compost along with food waste.”

The bags will cost customers just 5p – a charge intended simply to encourage customers to consider whether a bag is required before purchasing one.

Cllr Gwynne continued, “Customers are also being asked to help reduce other plastic waste if they can – as many people already do – by bringing their own shopping bags, reusable coffee mugs and cutlery, and reusable containers when they’re visiting the markets’ food stalls.

“And of course Ashton Indoor Market now has its own Refill Station, which is situated in Tameside Wellbeing Corner. So shoppers can refill their reusable water bottles for free, to help stay hydrated and healthy on the go as well as reducing plastic bottle waste.”

The new Refill Station was donated by United Utilities, and is part of the national Refill Scheme, which has 16,000 Refill Stations nationwide including more than 40 in Tameside, all part of a major national drive to cut single-use plastic.

Steve Hadfield, the Council’s markets and business development manager, said: “We surveyed all businesses within Ashton Market Hall to get everyone’s ideas on cutting single-use plastics. There were some great examples of traders already taking some great steps to reduce plastics. Some traders have already replaced plastic cutlery with wooden or bamboo alternatives, or swapped plastic food trays for cardboard. A lot of shoppers are helping by bringing their own reusable hot drinks cups and Tupperware containers.

“This highlights the joint commitment from the Council and businesses being shown across our markets and provides a strong foundation for future improvements.”