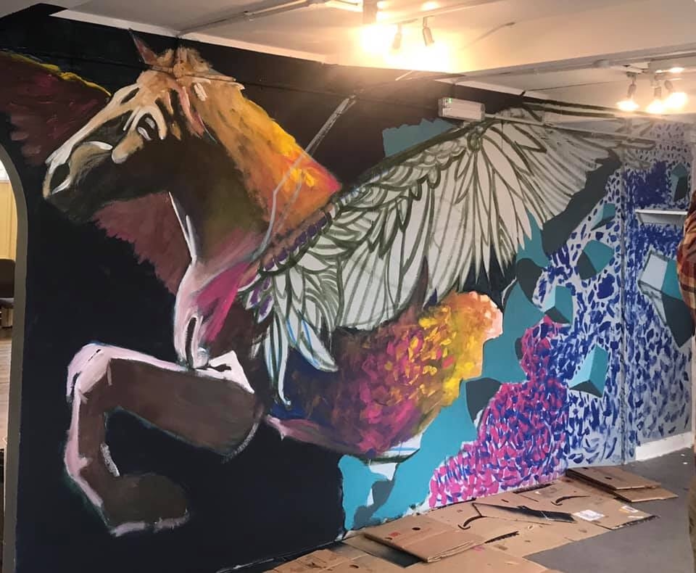 A South American artist who has painted murals around the world is creating his second public artwork in Salford using money taken from criminals.

Javier Espinal, from Honduras, came to Irlam and Cadishead in 2015 to work with schoolchildren to create a vibrant blue bomb mural in Prince’s Park. Now he’s back in the city as part of a trip across Europe.

Javier, who has been a professional artist for 30 years, is working with young people in Little Hulton to design and paint a mural on the outside of the Bridgewater youth centre which is due to be completed by mid-September.

The theme of the mural is mythological creatures​ with a Pegasus and night scene in the main indoor space. On the wall outside will be a stag with a waterfall and rainbow, representing the colours are of the LGBTQ group and unity.

The £2000 project has been funded partly through money recovered from criminals under the Proceeds of Crime Act 2002 and the Little Hulton and Walkden community committee which receives funding from Salford City Council to spend on local projects.

Deputy City Mayor, Councillor John Merry, said: “We’re delighted to see Javier back in Salford once again. His Irlam mural, which involved dozens of local young people, was superb and everyone who took part really enjoyed developing it and seeing the finished artwork.

“It’s a great opportunity for young people to work with a professional artist and learn new skills.  I’m pleased to see that the proceeds of crime will be put to such good and visible use in Little Hulton, creating something positive and lasting for the local community.”

Javier began painting when he was six years old and is a graduate of Loughborough University. His 2015 Salford project on Liverpool Road was inspired by the designs of Year 7 and Year 8 pupils from Irlam and Cadishead high school which included butterflies, eyes, trees, a train from the former steelworks and the community hall which once stood on the site.