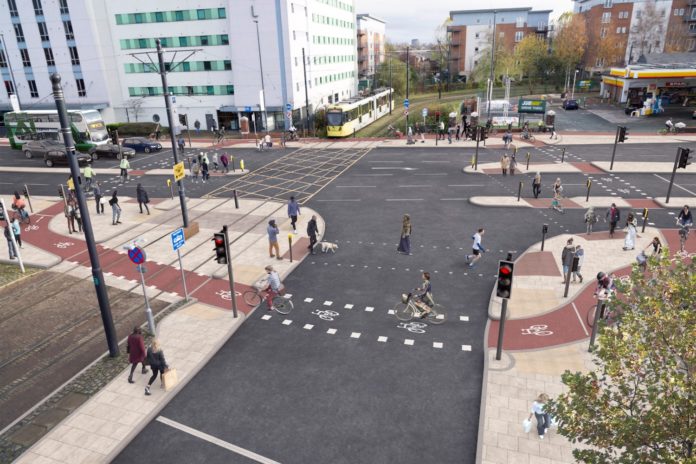 Three new projects in Salford, and two in Wigan and been put forward for funding. If approved, it would see around £5.7 million provided from the Mayor’s Cycling and Walking Challenge Fund with a further £15.1 million coming from council contributions.

The latest projects bring the total planned spend on cycling and walking across Greater Manchester to around £67 million.

A total of 24 confirmed projects so far will deliver 144 new and upgraded crossings and junctions as well as 26 miles of new cycling and walking routes. This includes nine miles of Dutch-style cycle lanes that are separated from motor traffic.

Greater Manchester’s Cycling and Walking Commissioner, Chris Boardman, said: “We’ve now got some fantastic schemes in the pipeline and we want to fast-track works as much as possible to kick-start Greater Manchester’s transformation into a cleaner and greener city-region.

“We know that all councils are now working on further schemes and I’d encourage people to keep in touch with their local authority to find out and feed in to what’s planned in their areas. In the New Year, we’ll be publishing the second draft of our network map that will reflect the thousands of comments we’ve had from local people. The map will then be used in collaboration with the districts to help us prioritise future schemes.”

The Mayor of Greater Manchester, Andy Burnham, said: “I’ve seen the difference that cycling and walking infrastructure makes to cities like Copenhagen and New York. This is about enhancing neighbourhoods so that they work for people, making trips on foot and by bike the most attractive and easy way to travel.

“Well done to all Greater Manchester councils on the schemes proposed so far and we look forward to many more being put forward in the New Year.”

The three new proposed projects are:

Does writing well matter in an age of instant communication?