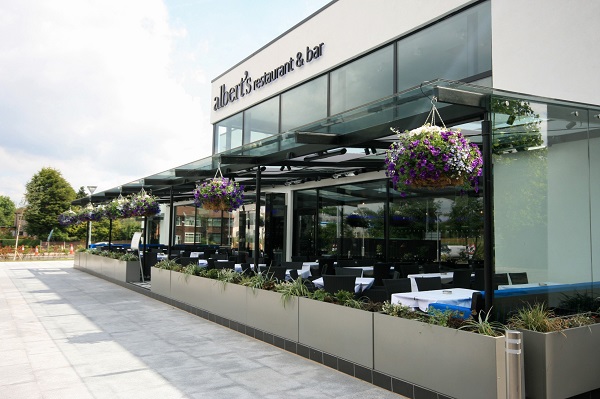 Three people have been jailed after they lured a man from a Swinton restaurant before he was shot in the knee in the car park.

32 year old Domaine Robinson of Graythorpe Walk, Salford was sentenced to 11 years and eight months after pleading guilty to conspiracy to possessing firearms to commit an indictable offence and conspiracy to commit GBH with intent.

Michael Crimes aged 40 of Littlegreen Gardens, Salford was sentenced to six years and five months after pleading guilty to participating in in the activity of an organised crime group.

Amy Cooper aged 32 of Barrfield Road, Salford was sentenced to 18 months, suspended for two years, after pleading guilty to assisting an offender.

The court heard how on Sunday 4 February this year at around 6.30pm, the victim,  a 30-year-old man, was in Alberts Restaurant on East Lancashire Road in Swinton with friends.

Around ten minutes later, Robinson – who had been driven in a stolen Ford Focus and dropped off nearby – walked in to the restaurant and joined the group.

He was then seen on CCTV frequently coming out of the restaurant to smoke cigarettes and at around 8.25pm, walked to the car park and stood in front of the stolen car before looking directly in to the car and walking back in to the restaurant.

As the group left at around 8.50pm and walked across the car park, an unidentified man got out of the Ford Focus and approached the victim before shooting him in the knee.

Robinson had hung back as the group exited the restaurant as he knew what was about to happen. He then quickly assessed the injuries that had been inflicted before leaving the scene in a taxi.

The unidentified shooter fled the scene in the stolen car which was later recovered near to Cooper’s house after Crimes had set it on fire.

During the investigation into the circumstances surrounding the incident, detectives trawled through hours of CCTV footage which showed the car making several stops before Robinson was eventually dropped off at the restaurant.

Analysis of Robinson’s phone records found that he was in frequent contact with Cooper and Crimes throughout the evening.

Senior Investigating Officer, Detective Inspector Dave Turner, said: “Three people have today been held to account for their actions that left a man in hospital with serious leg injuries. Thankfully, he has recovered but clearly this incident could easily have had much worse consequences.

“Robinson stood back and watched as the group left the restaurant. He knew full well what was about to happen and had plenty of opportunity to stop it or raise the alarm but instead he watched it unfold and attempted to cover his tracks.

“While these individuals have today been sentenced for their role in this conspiracy, our investigation remains ongoing and our team are currently following several lines of enquiry in an attempt to identify the shooter and anyone else involved to ensure they are held accountable for their actions.

“Throughout the whole operation we have worked closely with our partners, sharing expertise to enable us to crack down on organised crime across Salford. We will continue to work alongside them to bring those involved in organised crime to justice.”

Man in his 30’s kidnapped in Fallowfield, beaten up and dumped in vicious murder...