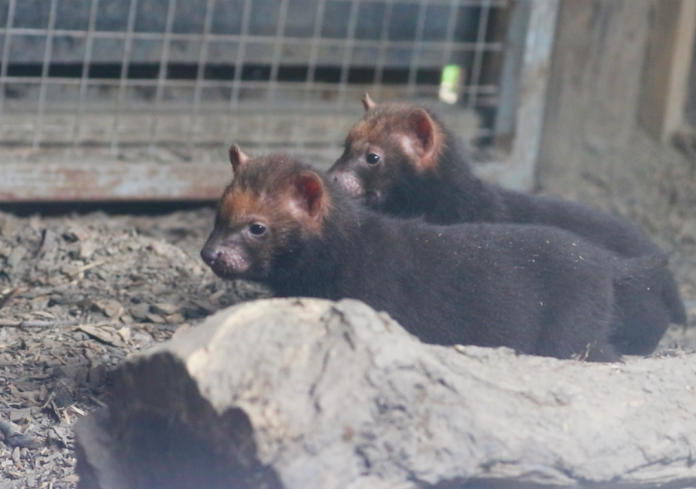 One of Knowsley Safari’s most peculiar creatures has proudly produced another litter.

The South American bush dog is the world’s smallest pack hunting dog species. While they are capable of bringing down animals many times their own size, they show their more tender side as they care for their babies. The new pups are the offspring of parents, Simon and Lola, who are busy looking after their third litter!

The pair were coupled up at Knowsley in September 2016 after a brand new, natural habitat was created for them to breed and thrive. Bush dogs are well adapted for a wet habitat and are very good swimmers with their webbed feet. The walkaround area of Knowsley Safari was chosen as a new home for bush dogs because of its large pond and flowing water – all features the parents and previous litters love to explore.

The latest pups are just 5 weeks old and mum has been keeping them close by to nurse them ahead of introducing them to their home. Keepers had set up camera traps in order to catch a glimpse of the babies and their patience was rewarded with footage of them exploring the area. She had four new pups.

Native to South America, bush dogs are classified as near threatened due to human developments impacting their environment. Although belonging to the dog family, the very private animals look much more like otters or bears in appearance, with webbed feet, making them excellent swimmers,as well as incredibly lovable and cute.

Visitors will soon be able to view the newborn pups from a variety of specially created viewpoints including footpaths, a raised children’s platform and large glass viewing panels. Knowsley’s team has created signage that tell the story of the bush dogs, their role in the ecosystem, the threat from humans in the wild and help visitors understand the unique characteristics of these fascinating animals.

Manchester Collective have opened applications for their first ever Winter Residency