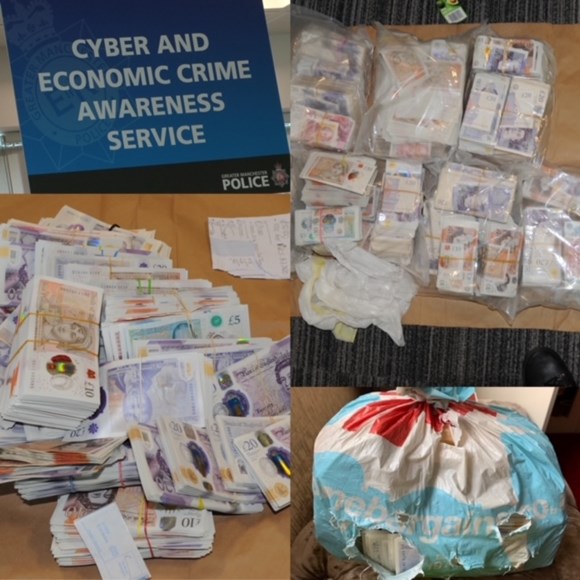 Since April 2020, specialist investigators in the Economic and Cyber Crime Section, as well as investigators based around the districts of Greater Manchester, have obtained Court orders valued at nearly £11,000,000 under the Proceeds of Crime Act. Just short of £2,000,000 has been obtained as a result of Confiscation Orders following a conviction from an acquisitive offence, and around £9,000,000 has been forfeited under Civil Recovery Legislation.

Additionally, a further £1,500,000 has been recovered from bank accounts and returned directly to the victims of crime, thanks to early intervention by the Fraud Triage Desk.

Specialist team members from the Economic and Cyber Crime Section have also seized cash and assets worth approximately £7.5 million in the last year, and frozen bank balances totalling £3.5 million in preparation for upcoming forfeiture hearings.

The Economic and Cyber Crime Section is responsible for not only investigating fraud and money laundering associated with organised crime, but also the freezing and seizing of assets believed to have been gained through, or intended for use in criminal activity. They are also tasked with finding out where large sums of cash, often uncovered in stop and searches or during warrants carried out by other units, comes from, and if, on the balance of probability, it came from crime.

Some of the cases investigated by the unit last year included an exhaustive investigation into three companies, selling tokens to stream live pornographic shows on websites in their control that were freely available elsewhere. It was believed that they were being used to launder criminal proceeds.

The seizure of cash discovered hidden in a vehicle stopped on the M62 and the confiscation of over £100,000 after a man fraudulently claimed tax credits and conspired to supply cocaine.

As part of the Asset Recovery Incentivisation Scheme run by the Home Office, some of the funds recovered will be returned to Greater Manchester Police, to help pay for further asset recovery work, or fund community projects. In 2020-21, a total of over £4.5 million will be returned to GMP.

Financial Investigations Manager, Ben Evans of the Economic and Cyber Crime Section said: “This represents our most successful year to date in terms of asset recovery and is especially outstanding considering the challenges faced due to the COVID pandemic.

“The officers and staff involved in asset recovery have worked hard under difficult circumstances and the figures show just how hard they have worked and how well they have performed.

“Although we’re very pleased with these results, we are acutely aware that fighting Economic and Cyber Crime is relentless. We will continue to work diligently to remove criminal proceeds from the hands of those who seek to profit from criminality. Asset recovery legislation allows us to disrupt criminal enterprises, deter people from becoming involved in crime and recompense victims and communities blighted by criminality.”