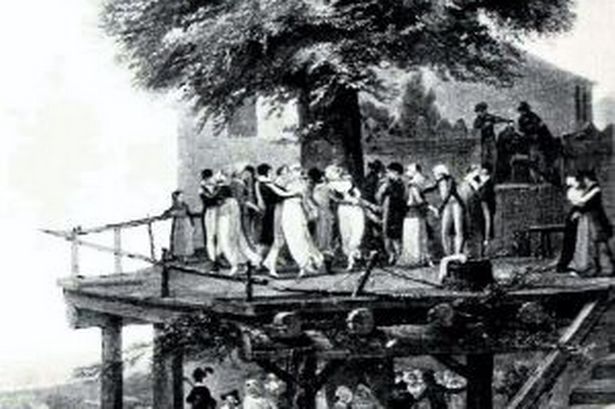 An advert  appeared  in  the  Manchester  Guardian  in  the  late  summer  of 1828 for Robert Tinker’s Vauxhall Gardens.

“On Thursday evening, 11th  September, a grand gala will take place which will be brilliantly illuminated with upwards of six thousand lamps, tastefully displayed in numerous devices, festooned and interspersed with transparencies, patriotic, humorous and incidental”.

Robert Tinker’s gardens on the banks of the River Irk close to Collyhurst Hall, and were in the early to mid 19th Century, the place to be seen by the aspiring classes of Manchester.

The year of the advert there was a special attraction, a giant cucumber which had been grown in the gardens reaching a length of 7ft and 8 inches and a a large and beautiful balloon was to be “liberated”at 9pm

Tinker, by all accounts, had begun these extravaganzas by celebrating Wellington’s triumph in the Spanish campaign with the lighting of 3,000 coloured lanterns.

The gardens covered twenty three acres and Tinker would capitalise on this oasis by opening the Grapes and Compass Coffee House where people would partake of the beverages after promenading around the park in their Saturday afternoon and Sunday Best, sitting at small tables, sheltered by overhanging trees and alcoves.

The gardens were so popular that people, keen to avoid the charge to enter, would break down the fences only to be confronted by “men stationed with dogs and firearms to detect and bring to justice such offenders”

On Sundays and holidays people would come on horseback from Moston and Ancoats and one advertisement states that `excellent grass for horses is available at moderate terms’ – especially as it was grown in the same soil as the giant cucumber.”

“Mr Tinker named his idyll Elysian Gardens, after the place in Greek mythology where the souls of the heroic and the virtuous were laid to rest, and later Vauxhall Gardens, as in London’s renowned place of recreation. His gardens were adorned by 3,000 coloured lights and those who paid 1s 6d (7.5p) to enter in the early 1800s were treated to a night which was ‘at once intelligent, rural and delightful’

Tinker died in 1836 and gradually his gardens were whittled away, the subsoil was sold to iron moulders who cherished its certain properties and before long the trees were chopped down and houses were being built on the former site