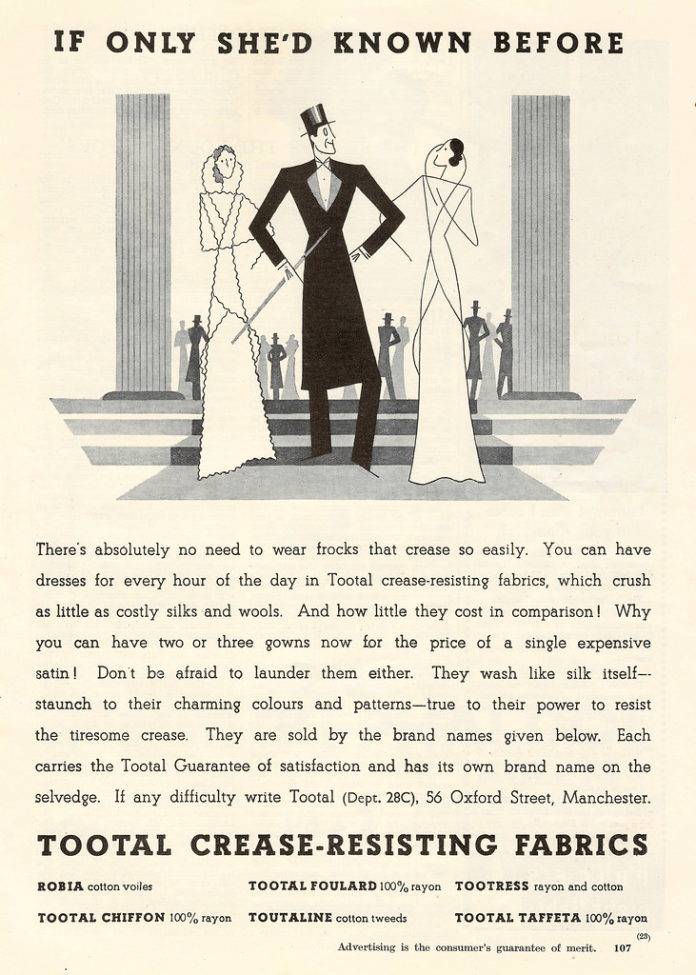 Walk down Oxford Road and you can’t miss a grand building which now amongst other things houses the offices of the Mayor of Greater Manchester.

Look closely at the Terracotta building now called Churchgate House and you will see that it was once the headquarters of Tootal, Broadhurst Lee and Co, a name maybe not so familiar today but once everyone would have owned one of their products.

“Ties to suit every occasion from the board room to the boxing match” said the advert, adding “Tootal ties are washable and marked stebilized for tested crease-resistance.”

The firm can trace its beginnings back to the start of Manchester being the town of Cottonopolis, founded in 1799 by textile merchant Robert Gardner and soon to be joined by Henry Lee whose father’s interests in cotton and farming saw his son rising early and labouring all day in his two-fold employment.

Lee, who would introduce the power loom for the making of fabrics and would be joined in the middle of the Nineteenth century by the Tootal family as the firm expanded, acquiring mills in Newton Heath, Bolton and Sunnyside.

After several incarnations, the firm became Tootal, Broadhurst Lee and Co in 1888.

By 1939 the firm was weaving silk and wool and producing handkerchiefs and ties.  It had expanded out of its Manchester base with branches in Belfast, Birmingham, Leeds, London and Glasgow and overseas in Argentina, Australia, Canada, France, and New Zealand as well as agencies throughout the world.  Its subsidiary companies would manufacture dresses, carry out bleaching, dyeing and crease resistant finishing. New factories would open after the war in St. Helens, and in Devonport, Tasmania.

By the early 1970’s it employed 25,000 people around the world, having joined with the English Cotton Company and the Calico Printers Association before it was acquired by Coats Viyella at the beginning of the 1990’s.

The Tootal Brand continues though.Their scarves re-emerged in the 80s as part of the new romantic trend and were resurrected again in the turn of the millennium with the rise of Brit Pop – worn by the likes of Paul Weller, Liam Gallagher, Robbie Williams and Pete Doherty.