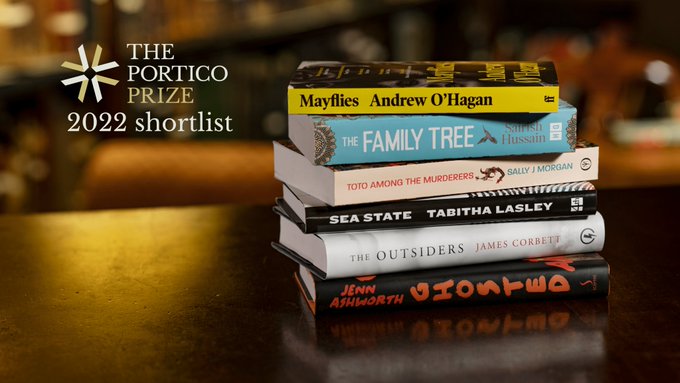 The shortlist for The Portico Prize for Literature – the UK’s only award for outstanding Northern writing – is announced today, Tuesday 7 December.

The six books on the shortlist for the £10,000 prize include five novels and one memoir, with exciting new voices sitting alongside established writers, each one exploring ‘the spirit of the North’.

The 2022 shortlist, in alphabetical order by author, is:

Contending for the Prize are three exceptional debut novels. The author and journalist James Corbett is shortlisted for his first novel The Outsiders, a powerful story set against the backdrop of the Liverpool riots of the early 1980s. He is joined by Bradford-born Sairish Hussain, whose illuminating novel The Family Tree tells the moving story of a multi-generational British Muslim family living in the North of England. Meanwhile Sally J. Morgan brings to life the 1970s in the North in Toto Among the Murderers, a story loosely based on her own experience of being offered a lift by the infamous murderers Fred and Rosemary West.

Two further novels on the shortlist are Ghosted, a dark, funny and unconventional love story and the ninth book by Preston-born Jenn Ashworth, and Mayflies by Andrew O’Hagan, a deeply personal and powerful story of youth, lifelong friendship and an epic night out in Manchester in 1986. Completing the shortlist is a debut non-fiction title: Sea State, a compelling memoir by Tabitha Lasley – an extraordinary account of her time spent with the men who work on offshore North Sea oil rigs.

The judges chose the six books on the shortlist from a longlist of 14 selected by the Portico Prize’s Society of Readers and Writers.

Gary Younge, the award-winning author, broadcaster and a Professor of Sociology at the University of Manchester and Chair of Judges, says: “The list illustrates the degree to which there is not one North but many, rooted not just in place but time, gender, race and religion: all moulded into elegant prose and conveyed with engaging storytelling. Throughout runs a strong sense of unromantic nostalgia for a North that no longer exists and yet remains with us so long as the stories are told.”

Lynne Allan, Chair of The Portico Library says: “Fittingly for a prize hosted by the historic Portico Library, these six books vividly explore how the past haunts and shapes the present and the future. They range over diverse individual lives, families and communities. Each one is an entertaining and irresistible page-turner allowing the reader to enter and inhabit the minds, existence, loves and desires of the protagonists. These shortlisted writers profoundly and fearlessly reflect on their experience of the North. Here you will find engaging stories of inclusion and exclusion, of being an insider and outsider and they represent a wide scope of Northern identity.”

The winner of The Portico Prize will be announced at a ceremony on Thursday 20 January 2022. Each of the shortlisted authors will be gifted with honorary membership of The Portico Library in 2022 and the winner will receive £10,000.

Alongside Gary Younge, the judging panel comprises the broadcaster Melanie Sykes (also Editor-in-Chief of The Frank Magazine and co-presenter of the Sykes & Savidge Book Club); the poet and essayist and former Young People’s Laureate for London Momtaza Mehri; and Anita Singh, arts and entertainment editor at The Daily Telegraph.

Christmas Offers at The Refuge, Bill’s, The Bay Horse Tavern and Dakota Grill

Mancunian Life Before Coronavirus: ‘Before’ Photos of Manchester Pre-Lockdown