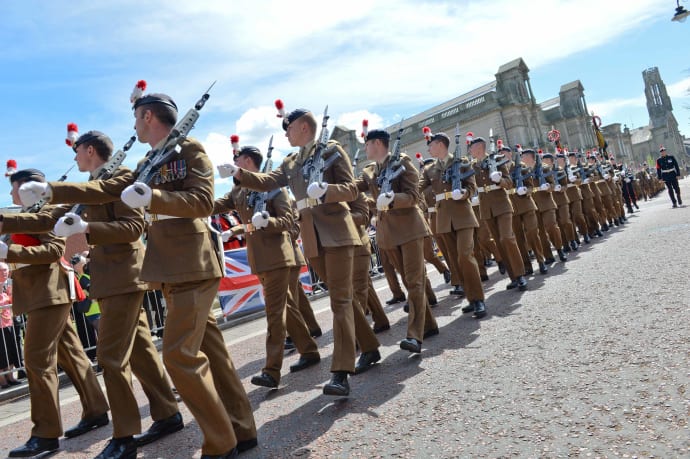 The Royal Regiment of Fusiliers will commemorate Gallipoli with a special parade through Bury town centre this Sunday (28th April) starting at 1.10pm from The Rock.

The annual event will see over 300 people take part in the parade, which will include serving Fusiliers from Fifth Fusiliers as well as Fusilier Cadets and Veterans. Civic guests and dignatories from Bury will join the Colonel of the Regiment, Major General Paul Nanson CBE, when taking the salute outside The Fusilier Museum.

Last year saw the Regiment celebrate its 50th anniversary with a special programme of events taking place around the country. This year’s Gallipoli commemorations will also see the unveiling of a new stone memorial in the Gallipoli Garden which recognises all 18 Lancashire Fusilier Victoria Cross winners from the First World War.

The Lancashire Fusiliers fought in the Gallipoli campaign of World War 1 and won the famous “6 VCs before breakfast”. Each year the town commemorates such bravery with a special parade through the town.

Gallipoli commemorations will start with a special church service at Bury Parish Church on Sunday 28th April for VIPs and invited guests, before the parade forms up on The Rock. The parade will step off at 1.10pm, following a short route around the town, before taking the salute outside The Fusilier Museum on Silver Street.

Colonel James Denny, Regimental Secretary for the Royal Regiment of Fusiliers, said: “Gallipoli is an important day in our Regimental calendar, so once again we will pay tribute to the fallen and recognise the ultimate sacrifice they made as Lancashire Fusiliers. The parade in Bury is always a popular event and we look forward to taking part in this year’s commemorations following our 50th anniversary last year.”

The Royal Regiment of Fusiliers, known as ‘The Fusiliers’, is an English infantry Regiment in the British Army, formed from four historic Fusilier Regiments in 1968. Since then, the Fusiliers have seen service across the world in Northern Ireland, Cyprus, the Balkans, the 1st and 2nd Gulf Wars and Afghanistan. The Regiment has two battalions – First Fusiliers in Tidworth and Fifth Fusiliers in Newcastle – and both adapt readily to challenging scenarios.

Indoor gatherings have been the main breach faced by GMP as numbers grow across...