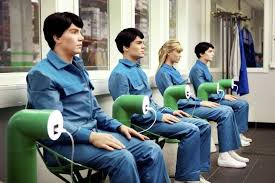 Few doubt that our lives will soon be transformed by the revolutions in robotics and artificial intelligence. Walking, talking robots look set to join us in our workplaces, in our homes … and maybe even our bedrooms! What will this future look like, and how can we make the most of it?

To explore these questions, Channel 4 has announced that it has specially commissioned a series of documentaries, including AI Guy which sees Guy Martin explore the future of motoring and self-driving cars – and take on an artificially-intelligent racecar to see who is fastest, The Sex Bots are Coming about the inventors on the brink of making sex robots a reality, and their clients who are eager for their services, Can We Live with Robots with dancer, Akram Khan, who looks at how robots are already co-existing with humans, and produces exhilarating new piece of hybrid robotic dance.

Plus there is Trust Me –I’m A Robot, in which David Tennant narrates a warm-hearted documentary following inventors trying to make a robot that people like and trust. And finally Ask Jess explores a future-world where intelligent robots interact with us as equals, offering advice to our most intimate, personal problems.

Motorcycle racer and lorry mechanic Guy Martin investigates the most disruptive new technology to be introduced to the automotive world – autonomous vehicles. He’ll become the first person to ever take on an artificially intelligent racecar to discover what’s fastest – man or machine?

In just over ten years, half of all new cars sold will be electric, and 15% will be autonomous. So what does the future of transport hold for petrolheads like Guy, a man who loves traditional engines so much he has a lawnmower piston tattooed on his leg? He thinks the best way of learning is by doing, and while Silicone Valley spends millions designing next generation vehicles, Guy attempts to make his own robotic Ford Transit, at home, in his shed.

He’ll discover that the hard part is replicating human thought, and has to travel to Budapest to experience a fully so-called “Level 5” autonomous vehicle – ie a car that can truly think for itself. In a world’s first test he’ll be taken out on public roads, assuming he trusts the artificial intelligence to overtake other vehicles on the motorway…

Guy’s investigation will also look at the AI already built in to the cars made by Tesla, America’s most valuable car company, and see him answering the moral dilemmas in the Massachusetts Institute of Technology’s morality test – designed to instruct software engineers about how to program their autonomous vehicles for emergency scenarios. Would Guy prefer his AI car to save himself or the pedestrian outside?

The Sex Bots are Coming

Mankind has been obsessed with building humanoid robots for centuries. Now, as the prospect of living with robots is coming ever closer our focus is turning to having sex with them. This will explore how advancements in artificial intelligence and robotics have seen some companies try to make sex robots a reality.

Successfully combining AI technologies in a in a mass produced robot capable of intimacy and sex has never been done before and the race is on to be the first company to market.

Filmed over 2 years, the film follows one company as they build a protoype sexbot, called Harmony. We also meet James, who already owns four sex dolls and can’t wait to have his own, technologically cutting-edge, artificial girlfriend.
We learn what James finds so compelling about sexbots, and why he wants the dolls to show signs of life. But not everyone thinks the technological advancements are a good thing; critics claim this new generation of robotic lovers objectifies humans and query if they potentially endanger human relationships.

Can We Live With Robots?

Internationally-acclaimed dancer and choreographer Akram Khan has spent his career researching the big stories of our time and distilling them into dance.

In this unique project for Channel 4, he is exploring the impact robots and AI are having right now on human relationships – and meets the cutting-edge robots which are set to infiltrate our futures.

Following his encounters with these incredible machines, he interrogates his own reactions to them and improvises ideas to produce an exhilarating new piece of dance that captures and anticipates a future of man and machine’s coexistence.

Travelling from the UK to Japan and USA, Akram meets the robots already co-existing with humans and the scientists harnessing artificial intelligence and the most advanced robotic mobility techniques to create eerily humanistic machines for the 21st century.

Initially wary of the potential threats robots pose to society and sceptical of their emotional intelligence ability, Akram is surprised to meet people who have established meaningful companionships with them; people who have chosen to embrace them as colleagues and welcome them as members of their own family.

Akram’s work from Giselle with the English National Ballet to the London Olympics Opening Ceremony has always been based on observing the way people move and interact. In this context, he studies the way robots have been animated in order to replicate and incorporate their movements in dance.

He meets the experts who are building in responsive movements and reactions from robots as well as an ability to read and mimic human emotions and aiming to preparing them to negotiate the complex rules of social etiquette of movement.

All of Akram’s encounters with these robots of now and tomorrow culminate in the finale of this visually stunning film – he presents a powerful and exclusive work with dancer Ching Ying Chien which portrays the emotional tensions and connections in human-robot relationships. Tensions and connections which we can all expect need to encounter sooner rather than later.

Trust Me –I’m A Robot

David Tennant narrates this warm-hearted documentary giving a fascinating insight into a future of robotics we’ve never seen before.

We humans have a cultural fear of robots, but eccentric Canadian robot inventor and puppeteer David McGoran is on a mission to fix this, by making a new kind of machine that moves like we do. A loveable robot that even people on the street will open up to.

Adopting the same techniques as Disney and Pixar, David designs a robot using the power of movement, to trick us into believing it has life.

Over the course of the film, David and his team attempt to create a machine that anyone would believe and trust and even let into their lives. But the real test comes when David abandons his new robot on the streets of Bristol. Programmed with a simple quest – to find out more about humans – his robot films its own extraordinary adventure, as it tries to connect with humans in a whole new way.

Can David’s little robot convince people it’s real, and will they be brave enough to open up and tell it something about themselves?

Just how far would you trust a robot to help you find solutions to the most intimate, personal problems that trouble us all? In Ask Jess a team of AI experts have developed a robot of the future to find out….

Artificial Intelligence (AI) is starting to be a far greater part of all our lives. From Siri to Alexa, we rely on AI for everything in many parts of our lives –and increasingly so when we’re at home. But as the AI gets more advanced, just how far will we let it into our most private thoughts and concerns? And can it ever replace, the wisdom and advice that traditionally we have always sourced from other humans?

A team of experts from Manchester and Plymouth Universities have worked together with the aim to answer some of these questions. “This technology is coming. It’s incredibly important we find out now how people are going to react to it,” explains Dr Caroline Jay, from Manchester University’s School Of Computer Sciences.

Jess, is a personal assistant robot, the sort of device we may all be consulting before too long. Along with her team of operator assistants, Jess uses AI based analysis to offer couples and families advice on some of the problems that life throws up. Marriage, divorce, infidelity, obesity Jess isn’t afraid to bring her analysis to the big issues that people bring her.

The results are extraordinary. “As soon as we give a robot two eyes and a mouth, we just can’t help treating that robot as human,” says Tony Belpaeme, Professor of Robotics at Plymouth University. “People are social beings, we’ve evolved to be social, and whether that’s with other humans or robots, ultimately doesn’t seem to matter if the technology is good enough!”