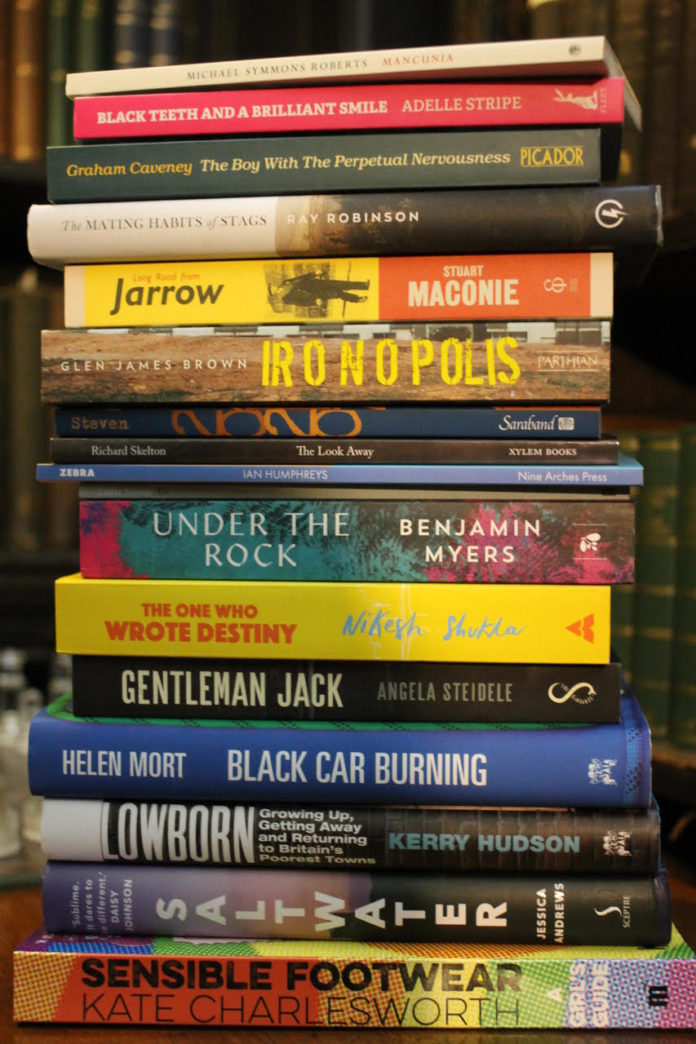 The longlist for The Portico Prize for Literature – the UK’s only award for outstanding literature that best evokes the spirit of the North – is announced today, Monday 30 September.

Once described as ‘the Booker of the North’, the £10,000 Prize is open to literature across the formats of fiction, non-fiction and poetry.

The longlist of 17 books explores the myriad themes of identity, belonging, gender, class and the meaning of place – all connected by the spirit of the North.

The 2019 longlist, in alphabetical order by author, is:

Of the eight fiction titles on the list, four are debut novels: Saltwater by Jessica Andrews, a story of self-discovery by a girl from Sunderland who moves to London; Ironopolis by Glen James Brown, set on a fictional council estate in post-industrial Middlesbrough; Black Car Burning, a love letter to Helen Mort’s home town of Sheffield; and Black Teeth and a Brilliant Smile by Adelle Stripe, a novel inspired by the life of Bradford playwright, Andrea Dunbar.

The four further fiction titles on the list are: The Look Away by musician and poet Richard Skelton; The Mating Habit of Stags by Ray Robinson, a reflective novel set in the moors of North Yorkshire; The One who Wrote Destiny, a powerful and important novel about a young Kenyan trying to adjust to life in ‘60s North Yorkshire by Nikesh Shukla; and the novella 2020, Kenneth Steven’s gripping examination of life as it might be in 2020.

In non-fiction, Ben Myers, joint-winner of the 2015 Portico Prize, returns with Under the Rock: The Poetry of a Place, an investigation into nature, literature, history, memory and the meaning of place in modern Britain.

In Long Road from Jarrow, writer and broadcaster Stuart Maconie masterfully pieces together local and regional history at the time of the Jarrow March with the state of Britain today, and in Gentleman Jack: A Biography of Anne Lister, Angela Steidele captivates the reader with her admirable and comprehensive research into the life of history’s first modern lesbian who inspired the television series Gentleman Jack.

The longlist includes two astonishing memoirs: in Lowborn, Growing Up, Getting Away and Returning to Britain’s Poorest Towns, Kerry Hudson revisits the towns she grew up in to try to discover what being poor really means in Britain today; and in The Boy with the Perpetual Nervousness, Graham Caveney describes growing up in Accrington as a member of the ‘Respectable Working Class’.

There is also one graphic memoir on the list: Sensible Footwear: A Girl’s Guide by Kate Charlesworth, as much a personal account of Charlesworth’s life as it is a textbook on 20th-century British LGBTQ+ history.

Two debut collections of poetry feature on the longlist, from poets both based in Hebden Bridge, West Yorkshire: Zebra, by Ian Humphreys, a beautifully-written collection about exploration, observation and acceptance; and Us in which Zaffar Kunial explores the convolutions of identity. Meanwhile, Michael Symmons Roberts, the award-winning poet who was shortlisted for the Portico Prize in 2015, presents a collection of poetry inspired by Manchester in Mancunia.

The longlist of 17 books was selected by the Portico Prize’s newly formed Society of Readers and Writers.

A shortlist of six books – to be announced on Tuesday 26 November – will be selected by a panel of judges, chaired by journalist and broadcaster Simon Savidge of Savidge Reads. He is joined by: Holliday Grainger, stage and screen actor; Kate Fox, stand-up poet; Zahid Hussain, author of The Curry Mile and Jean Sprackland, Professor of Creative Writing at Manchester Metropolitan University.

The Portico Prize was established in 1985 to celebrate the strong regional and literary identity of the North with the aim of raising awareness of its historical, cultural and literary heritage. This year it announced a new partnership with the Manchester Writing School at Manchester Metropolitan University.

Simon Savidge, Chair of Judges, says: “What a fantastic and varied list! A huge thank you to The Society of Readers and Writers for giving myself and the other judges such an intriguing selection of reading ahead. I’m really looking forward to getting lost in all things northern; reading and discussing these books over the coming months and seeing how they each evoke ‘the spirit of the north’. I already have a feeling that making a shortlist is going to be a tough job.”

Lynne Allan, Chair of The Portico Library says: “We have been delighted with the success of our unique and newly established Society of Readers and Writers, a group of fifteen individuals from the world of literature responsible for selecting this year’s Longlist. Their eclectic selection includes an exciting mix of formats and genres, ranging across fiction, creative non-fiction, memoir, poetry, place writing, biography, a graphic history and travel writing. We are especially thrilled that so many regional, independent publishers are represented this year. Established and first-time writers will now compete for a place on the shortlist.”

James Draper, Manager of the Manchester Writing School at Manchester Metropolitan University adds: “Manchester Metropolitan University is proud to have supported The Portico Library in relaunching their prizes for literature, and we are thrilled to see such a broad and exciting range of work on the longlist. We’ve enjoyed exploring the cultural heritage of the region through our series of ‘Rewriting the North’ events in partnership between the University’s Centre for Place Writing and The Portico Library – and we’re looking forward to celebrating this further with the announcement of the Prize shortlist and winners next year.”

The shortlist will be announced on Tuesday 26 November. Each of the shortlisted authors will be gifted with honorary membership of The Portico Library in 2020.

The winner will be announced at a ceremony at The Portico Library in Manchester on Thursday 23 January 2020.