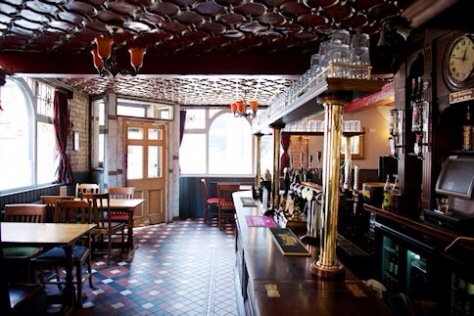 One of Manchester’s most historic pubs is to reopen this week after £235,000 worth of improvements.

The Salutation, off Grosvenor Park in Chorlton-on-Medlock, one of only two in the city with original 1840s décor, the other being the Britons Protection.

The building also bears a blue plaque marking the site nearby where Charlotte Bronte began to write novel Jane Eyre on a visit to Manchester in 1846.

She had come to Manchester with her father who was losing his sight due to cataracts where the operation to remove them had only recently been developed.

A popular community pub for decades, the Sally has been owned by Manchester Metropolitan University since 2011 and is run by its Students’ Union.

Major investment by the two organisations has seen the classic pub redecorated in true Victorian style and original features such as light fittings and ceiling mouldings restored. Additional works have been undertaken to bring the electrics, plumbing and environmental and accessibility standards up to modern building requirements.

The existing under-utilised hotel rooms on the first floor have been converted into meeting space for use by the local community.

Mike Palmer, Students’ Union President, said: “Since taking over management of the pub in July 2013, The Union has been keen to retain the character of the Sally.
“This is a landmark pub with a lot of history and we believe it is an important asset to our campus and the wider community.”