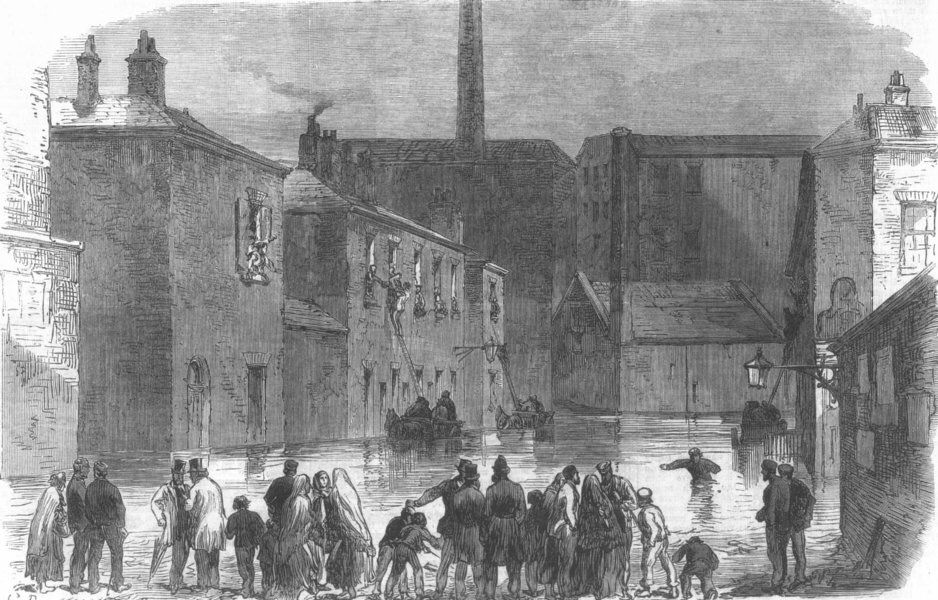 One hundred and forty eight years ago this week, a disastrous flood occurred which caused widespread and terrible damage to property in both Manchester and Salford.

The second week of November 1866 had seen continuous heavy rain fall across the area. Some reports put it at three and a half inches, the total rainfall usually expected for a month. It swelled the River Irwell and its tributaries and on the 17th of that month, the heavily laden rivers could take no more.

The worst hit area was in Salford especially around Lower Broughton where the wooden bridge connecting it to the old racecourse was swept away and around Strangeway’s.

The flooding extended further down the valley into Manchester where people assembled on bridges watching the debris which included pigs and according to one account, a horse, being swept down the river

One account described a huge lake of turbid water, “ rushing irresistibly along from the cliff to Salford Crescent, carrying with in its course, everything which it is capable of rooting up or dislodging from its place…..

“In Broughton lane, the inhabitants might be seen sailing from house to house in rafts and boats… In many dwellings the water was not only in the cellars and in the living rooms but might be seen rising in the bedrooms. Hundred sof families were crowded together in the attics and upper rooms of their houses and cottages looking with alarm at the water as it mounted higher and higher lapping against the stairs and cutting off any retreat from their watery prison.”

Three people lost their lives, the keeper of Peel Park and many others were rescued from the upper storeys of their homes and according to the Weekly News, “Man and beast were driven together, and the case of a pig in a bedroom ceased to be suggestive of Irish partiality.”

It’s consequences would be seen for years, damp getting into the walls and foundations of the houses leading to ill health in already bad living conditions.

It was estimated that eight hundred hectares of land covered by crowded tenements, dwelling houses and factories were flooded from the River Irwell.

The after scene was described

“The sight presented next morning was pitiful. The furniture and household belongings in hundreds of dwellings were hopelessly damaged or destroyed. The trees which lay in the course of the flood looked as though they had been fishing on their own account and had had a good haul in the shape of straw rags paper old baskets etc, by finding a lodgement in their branches.

Once the waters had receded, the blame game began and it was quickly established that despite the unprecedented heavy rains, much of the damage had been self inflicted.

A report following the flooding found that the damage was the result of rapid building around the river, often in defiance of regulations which had the effect of closing in the course of the water and obstructing the flow of the Irwell.

The enquiry would also examine the purification of the river, following years of sewage being poured into the water, the area around Lower Broughton would often be seen with thousands of gas bubbles rising out of the water.

When the waters retreated, the houses were left with the remnants of stage and obnoxious smells rising from their cellars.

Eventually, but it would take many years and more flooding, flood defences would be built.

The July crisis -what was Manchester up to?