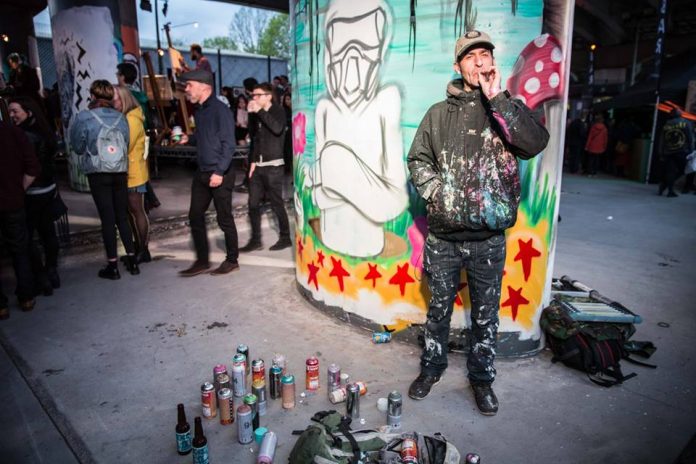 Manchester’s best kept secret, the phenomenal Art Battle will be staging its biggest event to date at none other than Manchester’s Albert Hall.

Battle Royal will see the 10 winners of the previous Art Battle Manchester events return to the ring for one last skirmish and compete for the ‘Champion of Champions’ crown.

It is only fitting that this ultimate contest will to be held in the stunning and atmospheric Grade II listed Wesleyan chapel, which was closed and hidden for over 40 years and recently restored to become the city’s most stunning venue.

Albert Hall’s capacity crowd will watch a spectacle of painters, illustrators, tattooists and street artists go head-to-head in what has been described at the city’s most energetic art event. With only 30 minutes to create a masterpiece, the audience decides the winner of each round and – ultimately – the artist who will be crowned Champion of Champions.

Since 2013, Art Battle Manchester has delivered 10 sold out battles across the city in mills, warehouses, music venues, theatres, a skate park and even an old fire station!

Hosted by broadcaster/DJ, Hattie Pearson, Battle Royal will mix up the new artists with DJs, art exhibitions, street food, a licensed bar and all manner of unexpected shenanigans.

Art Battle Manchester founder, John Macaulay – with his background of putting on live music – wanted to create an art-focused event with a gig atmosphere, making it accessible to everyone:

“It’s Manchester’s most energetic art event. We help turn artists into ‘art stars’ and the huge crowd – many of whom have never set foot in an art gallery – really play their part too.”

Art Battle Manchester together with Scarlet Nieschmidt – one of the ABM #8 artists – recently raised over £75, 000 for the #WeStandTogether fund. The idea was a direct response to the Manchester Arena bomb. Artists from Manchester and beyond, all kindly donated a piece of work each and 100% proceeds were given to the fund set up for the victims’ families.

Art Battle Manchester ALWAYS sell out, so don’t leave it too late to get tickets sorted!