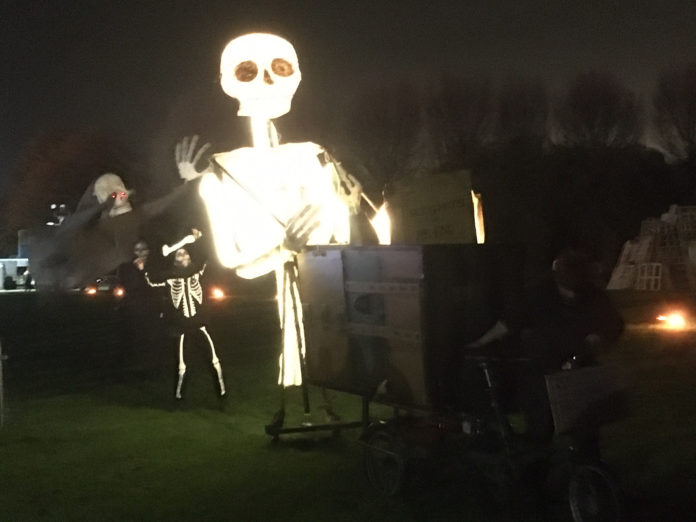 Salford’s Working Class Movement Library is working with Salford outdoor arts organisation Walk the Plank to bring the fascinating character of Thomas Paine to life for the people of Salford and Manchester.

In November 1819 the bones of this pioneering political theorist were brought to Salford by William Cobbett, having been dug up in New York, only to be refused entry to Manchester by the authorities with the horrors of the Peterloo Massacre fresh in their minds. 15 years later, the bones mysteriously vanished…

Now the Library is creating an alternative and artistic ending to the story with a lively procession through the streets of Salford to Manchester, featuring our giant illuminated Bones of Paine puppet, along with a live street band and dancing skeleton puppets.

The event also features an exhibition, Thomas Paine: citizen of the world, which will open on 27 November telling the story of Paine’s eventful life, his narrow misses from death and the key part he played in both the American and French revolutions.

The procession will begin from WCML at 4pm and end at the People’s History Museum (PHM) in Manchester.

The procession will make a couple of musical pit-stops on its journey: at Bexley Square – M3 6DJ at about 4.20pm for a vocal performance that will include songs written recently during workshops held at WCML; then at New Bailey – M3 5JL at about 5pm for another vocal performance, before the procession finally reaches PHM. The museum will be keeping its doors open until 6pm so people can view Paine’s writing desk and other items; their café will be serving celebratory Bones of Paine biscuits.