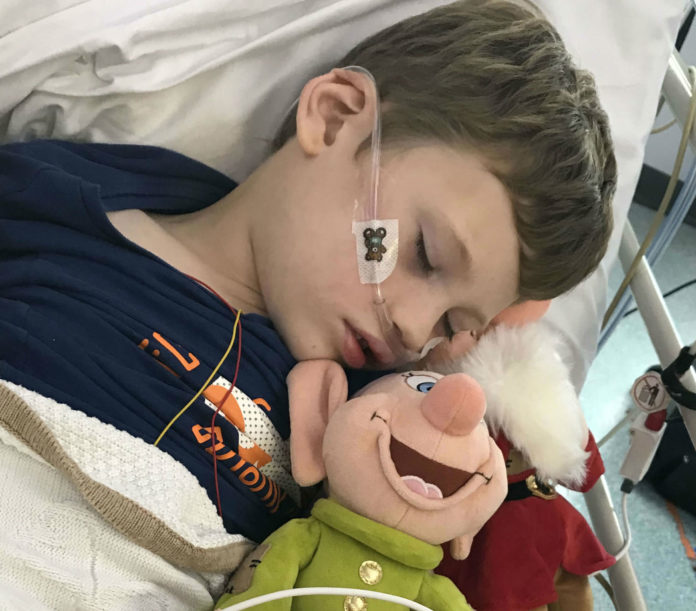 Six children are being rushed to hospital with pneumonia every hour in England, a report by two leading children’s agencies reveals.

Hospitals in England recorded 56,000 child emergency admissions for the disease last year, a jump of more than 50% compared to the number a decade ago.

Rates of admission were highest in poorer parts of the country.

Catherine Sage’s eight-year-old son, Edward, was rushed to hospital with severe pneumonia earlier this year. Doctors took an x-ray of Edward’s chest, which revealed that his lung had completely collapsed. Catherine, from Loughborough, said:

“He woke up in the night gasping for breath. He was making a sound I’d never heard him make before. It was really scary. I knew people were hospitalised for pneumonia but I thought it was only really old people. I had no idea it could be so dangerous for young children. I was surprised how severely ill it made him.”

Pneumonia kills more children globally than any other disease, according to new analysis by Save the Children and UNICEF. The disease claimed the lives of 800,000 children under the age of five in 2018, or one child every 39 seconds. 437,000 children aged under five died owing to diarrhoea and 272,000 from malaria. [4]

Despite these staggering figures, a recent poll for Save the Children by Opinium found only 4% of UK adults correctly identified pneumonia as the world’s biggest infectious killer. The majority (34%) believed malaria caused the largest number of child deaths, followed by diarrhoea (18%) and measles (11%). [5]

Pneumonia is caused by bacteria, viruses or fungi, and leaves children fighting for breath as their lungs fill with pus and fluid.

A bout of pneumonia in childhood can dramatically increase the risk of respiratory disease as an adult. [6]

Children with immune systems weakened by other infections or malnutrition, and those living in areas with high levels of air pollution, are at far greater risk of developing the disease.

Pneumonia can be prevented with vaccines, and easily treated with antibiotics costing just 20 pence if properly diagnosed.

But, despite the UK’s leading role in improving access to vaccines and health services, globally, tens of millions of children are still not vaccinated around the world – and one in three with symptoms do not receive essential medical care. [7]

Children with severe cases of pneumonia may also require oxygen treatment, which is rarely available in the poorest countries to the children who need it.

Kevin Watkins, CEO of Save the Children, said:

“These findings show pneumonia is a disease that affects the poorest children worst of all, wherever they are in the world. But while British children almost always survive, millions of children in poor countries are dying for want of vaccines, a few pence worth of antibiotics, and routine oxygen treatment. With such simple solutions, no child should have to die from pneumonia regardless of where they live.”

“This is a forgotten global epidemic that demands an urgent international response. The UK government must continue to invest in global efforts to tackle the pneumonia crisis so that children everywhere can access life-saving healthcare.”

“We’re lucky in the UK that we have the NHS and a childhood vaccination programme which includes pneumonia and influenza, so fewer children get these illnesses in the first place. If they do get ill, most can be treated within our healthcare system. However, these findings show that for thousands of children outside of the UK pneumonia is not an illness of the past but a killer in the present that will continue to prematurely take children’s lives if we don’t act now.

“Pneumonia can be easily prevented and cured with simple, and cost-effective measures, yet it remains the main infectious cause of death among children under five globally. We can change this, we must change this. We have the knowledge, tools and power to save children from a preventable death.”

U.K. Health Security Agency-Omicron up to 70 per cent less likely to lead to...