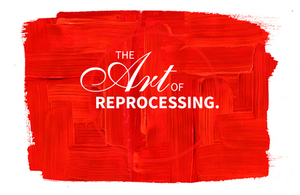 An exhibition celebrating the life of one of Britain’s most iconic nuclear plants has opened in Cumbria.

The Art of Reprocessing, at the Beacon museum Whitehaven, tells the story of Sellafield’s Thermal Oxide Reprocessing Plant (Thorp).

Commissioned by the site’s operator Sellafield Ltd, it features work from local, national, and international artists.

Each piece has been individually commissioned to convey a moment in the life of the plant.

The exhibition will be open until early January, with a a smaller version continuing until March 2019.

“Thorp is not just a Sellafield story; it’s part of the social history of west Cumbria.

“From the public inquiry in the 1970s, which decided it should go ahead, to the economic boom of the construction years and the 24 years of operations, it’s been stitched into the fabric of local life.

“For us, it’s an iconic building, but for many people it’s mysterious: it’s behind a fence, out of the sight.

“We wanted to make it accessible and meaningful to people who don’t know much about it.

“So we commissioned artists to take the story and give us their interpretation; to see it with fresh eyes and express it a new way.

“It’s a fabulous exhibition and I would encourage everyone who can to visit.”

It reprocessed more than 9,000 tonnes of spent nuclear fuel from nine countries around the world.

The final batch of fuel to be reprocessed began its journey through the plant on Friday, 9 November.

It will continue to serve the UK as a storage facility for spent fuel until the 2070s.

About half of its 450-strong workforce will remain in the plant to manage clean-out operations. The remainder have been found other jobs at Sellafield.

Portal to an ancient world: app takes visitors back in time