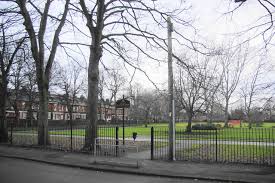 A woman and a man who were  approached by two men on Old Moat Park, Withington in the early hours of Sunday morning found themselves subjected to a terrifying robbery ordeal.

They threatened them before stealing the woman’s bank cards. One of the offenders then walked the woman to a cash machine in order to make her withdraw cash before returning to the park.

The men then forcibly walked the woman and the man to her address on Hill Street, Manchester.

The man was locked in the cellar before they woke a second man at the property and stole his mobile phones, cash, bank cards and car – a silver Nissan Micra.

Police are appealing for information.

Detective Constable Martyn Gibson of GMP’s City of Manchester Division said: “These people were subjected to a terrifying ordeal.

“Not content at having robbed the woman and her friend, these two men then marched her back to her property where the offence continued.

“We would appeal to anyone who was in the area at the time, has information or potentially dashcam or CCTV footage to get in touch immediately.”