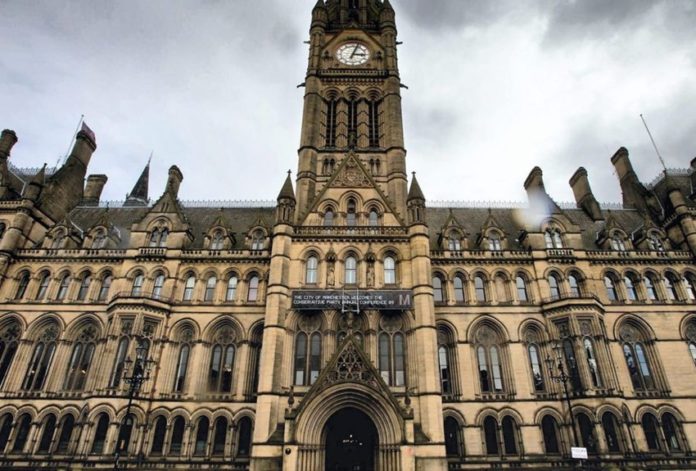 A new project telling some of the countless fascinating personal stories connected to Manchester Town Hall has been launched.

The Our Town Hall engagement project, run by Manchester-based arts and culture consultants Curated Place, is part of the ongoing scheme to repair, restore and partially refurbish the iconic Grade I-listed building – safeguarding it for future generations.

The first strand of the project is a unique exhibition of photographs and interviews entitled “Town Hall Tales”, which is on display in the Lower Ground Floor exhibition space at Central Library until late December 2019.

The exhibition celebrates the people of Manchester and their relationship with the iconic Town Hall through a series of captivating images by acclaimed photographer Layla Sailor, accompanied by memories and anecdotes curated by Manchester-based writer and artist Afshan D’souza-Lodhi.

The project includes the story of John and Frances Canning, who were married at the Town Hall in 2012 and whose ceremony coincided with a visit to the building from the Queen, in the city as part of her Diamond Jubilee celebrations and attending a lunch hosted by the Lord Mayor of Manchester.  Little did the happy couple know that arrangements had been made for the Queen and Prince Philip to congratulate them on their marriage and pose for photographs.

Other stories and photographs in the exhibition encompass a variety of people and experiences, from the daughter of the Lord Mayor who moved in to the Town Hall apartments from a council house in North Manchester, via annual Masquerade Balls which were held in the early 1990s, to sitting in the Great Hall listening to the Halle Orchestra rehearse and marvelling at Ford Madox Brown’s Manchester Murals, while having a sandwich for lunch.

Stephen Nuttall, Senior Producer and Project Manager at Curated Place, said: “An overwhelming sense of pride in the city comes to the forefront in each of these Town Hall Tales, and each captures a very special moment in the peoples lives with Manchester Town Hall as the ever present stage for these tales to unfold upon.”

The engagement project, which has been supported by funding from Arts Council England, will see a series of workshops, events and exhibitions presented in key cultural institutions across Manchester’s 32 wards.

The next project in the Our Town Hall series will be Manchester Mail, inspired by the city’s history of trading both goods and ideas.  Using the Mail Art formula – a populist artistic movement centered on sending small scale works through the post – the Manchester Mail project supports the next generation of innovators in the Manchester Youth Council, who will work closely with artists including the acclaimed collage and printmaker Sarah Hardacre, to create Mail Art for sharing with youth organisations in Iceland and Denmark – sparking conversations and ideas and continuing the trade of ideas that the city was built upon.

Boothstown Village Hall to get a £59k facelift