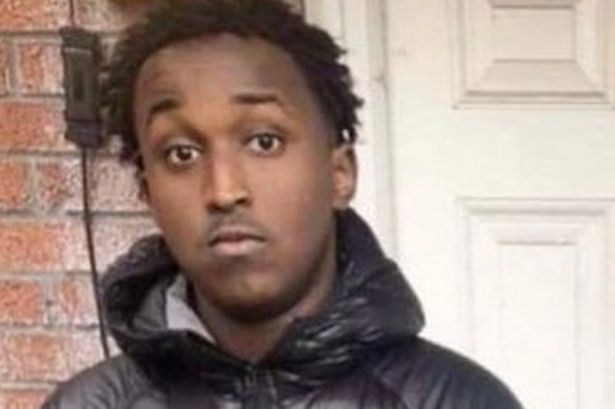 A group of teenagers who killed another teenager while he was playing football in Moss Side have been jailed for a combined total of 54 years and six months.

Mohamoud Mohamed, 17, was stabbed in the heart on Sunday 26 July last year whilst he was playing football on Henbury Street when he was approached by four teenagers who instantly drew weapons and began to chase him.

Jamall Walters 19, Daneaco Reid,20, Romeo Daley,19,and a 17-year-old boy who cannot be named for legal reasons, were all jailed at Manchester Crown today (Friday after being found guilty of manslaughter.

Walters also pleaded guilty to possession of a firearm with intent to cause fear of violence and was ordered to serve 13 years and six months.

The other three also pleaded guilty to possession of an offensive weapon and have been sentenced to 15, 14, and 12 years, respectively.

One of the teenagers, Daneco Reid, was also found to have filmed a video of him rapping about Mohamoud’s death.

Mohamoud was found collapsed in an alleyway that runs behind the residential addresses on Markington Street and Henbury Street.

Around 15 minutes later, police were called to a report of a male found with stab wounds in a park area near to Cowsby Street in Moss Side.

The male, a 17-year-old who cannot be named and was today sentenced for Mohamoud’s killing, was found to have run 200 metres from the scene injured with Danaeco Reid.

The investigation included extensive CCTV trawls where it was discovered that Mohamoud was stabbed by the gang once in the chest, before he made off into the alleyway chased by the armed gang where he sadly died.

Jamall Walters walked away from the alleyway first and was seen on CCTV to put what is believed to have been a firearm into his waistband before making off.

The other three followed and left Mohamoud in the alleyway with fatal injuries. Following a post mortem, it was also found that Mohamoud suffered shallow stab wounds to his face.

A 17-year-old, who cannot be named for legal reasons, was arrested near the scene and later charged. Following this, a thorough and complex investigation was launched which saw detectives attempt to track down the remaining three offenders by carrying out raids at their home addresses.

Walters, Reid, and Daley failed to return home following the incident and enquiries continued to locate them. Eventually, Daley handed himself in and the other two were found in the Monsall area of Manchester, where they were believed to be in hiding.

Mohamoud’s family said he ‘meant everything and more to those who had the privilege of knowing him’.

In a statement, his family said: “Mohamoud was a much cherished son, brother, uncle and nephew. His unique humour, unrivalled charisma and gentle nature will forever be absent in the rest of our lives.

“We will miss hearing his hearty laugh and seeing his beautiful smile.

“Although he meant nothing to those that have killed him, he meant everything and more to those who had the privilege of knowing him deeply. Forever loved, never to be forgotten and always in our hearts, our young Mohamoud.”

Detective Chief Inspector Benjamin Cottam, of GMP’s Major Incident Team, said: “This was a devastating attack on a young man who had his whole life ahead of him.

“The four clearly acted collectively with a joint intention to at the very least cause Mohamoud serious harm but these actions led to his brutal death and he was left in an alleyway.

“Detectives trawled through hours of CCTV and carried out a large volume of enquiries which led to Mohamoud’s killers now facing justice. The overwhelming evidence led to them being convicted and now facing time behind bars.

“We have a dedicated team of officers and staff who work alongside partners in the region to help those vulnerable by working in the community and developing close links with local schools and academies.

“This case has left another family devastated and I would urge those worried about young family members or friends involved in crime to get in touch with police, or Crimestoppers anonymously.”