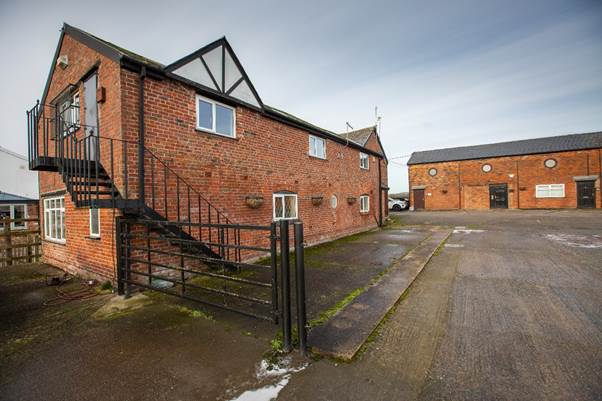 Tatton Group and Gascoigne Halman on behalf of a private client have just launched a prime development opportunity to market with residential planning permission for eight mews houses in a pair of charming Cheshire brick barns, just outside Knutsford.

Tabley Court is on Moss Lane, a beautiful and hidden rural location close to Mere that hosts spectacular homes including those of Everton footballers Jordan Pickford and Phil Jagielka, Take That’s Gary Barlow and Tatton MP the Rt Hon Esther McVey.  Just over two miles from Knutsford town centre, Tabley Court is also immediately accessible to the recently upgraded M6 and A556. The one acre site has a guide price of £1.5 million.

Originally a farm, the former barns were converted into commercial office units spanning the two separate blocks which are now vacant. The site has planning permission for a proposed scheme of eight mews houses of varying sizes, across two floors, providing an area of approximately 8600 sq ft, and significant potential subject to planning for an imaginative developer to extend or redevelop for either a larger number of homes for smaller families or bespoke detached houses.

Cheshire’s “golden triangle”, one of the most sought-after residential locations in the Northern Powerhouse, is almost entirely ‘shrink-wrapped’ in greenbelt with no major developments coming forward in over a generation, making opportunities like Tabley Court have significant rarity value.  Cheshire is a net importer of commuters as a result, and this is an ideal location for those working with innovative local businesses like the Hut Group, Barclays Bank, Waters Corporation and those at Manchester Airport, Booths and Alderley Park.  Set in the Cheshire countryside with panoramic views across the surrounding fields, future residents will also benefit from proximity to rapidly expanding Manchester Airport and Altrincham in just 12 minutes along with Manchester and Chester city centres in half an hour.

James McCain, Group Property Director at Tatton Group, said: “This is a really attractive site for a number of reasons and promises to deliver high-quality new housing provision in Knutsford by re-purposing the existing barn buildings. Alternatively, the buildings could also be extended or demolished (subject to planning) to increase the sales area substantially with one option we have looked at showing an extended development of 12 units over 11,500 sq. ft.

“The housing crisis, including the increase in demand of the south Manchester market for Built to Rent (PRS) and retirement living as well as smaller and larger sales product, continues unabated and Tabley Court offers a rare opportunity to help meet some of those needs.”

Over 55s are Fastest Growing Group of Users of Music Streaming Services in the...

Nightmare before Christmas: Chaos as deliveries don’t go as planned