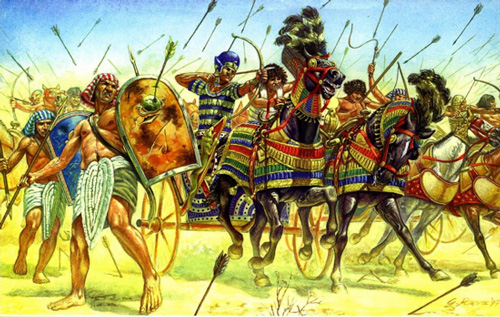 The terrible violence which afflicts regions of Syria has echoes of conflicts fought more than 3200 years ago.
Now Dr Nicky Nielsen, from The University of Manchester, will tell online students how the Battle of Qadesh, Syria fought in 1274 BCE, highlights how and why this region of the world remains a frequent point of conflict and warfare.
Qadesh is one of the earliest battles in recorded history where details of tactics are known. And it was also the largest chariot battle ever fought: Egyptologists believe between 5000 and 6000 chariots were involved.
Around 1285 BCE, the Egyptian pharaoh of Seti I first attacked the fortified settlement of Qadesh, located on the border between Syria and Lebanon.
The ruler of Qadesh agreed to shift his loyalties from the Hittite Empire, in modern-day Turkey, to Egypt. But after Seti’s death, Qadesh realigned its loyalties back to the Hittite Empire.
So in the spring of 1274 BCE, Seti’s son, Ramesses II, launched a campaign to re-take Qadesh, bringin 20.000 men with him into Syria.
Dr Nielsen said: “The Battle of Qadesh was a grudging stalemate. After being tricked by Hittite spies into rushing ahead without waiting for the bulk of his army, Ramesses nearly lost his life when his camp was ambushed by a large force of Hittite chariots.
“He was saved only by the timely arrival of Egyptian reinforcements, but he failed to conquer the city of Qadesh itself.”
He added: “Throughout the ages, the area around Qadesh – and much of modern-day Syria – has been home to innumerable conflict: the Persians conquered the territory in the 6th century BCE, then came Alexander the Great, the Roman Empire and many other groups and states. The modern site of Qadesh, the small village of Tell al-Nabi Mando, remains within a conflict zone to the present day.”
“The Syrian-Lebanese border, which runs close by the site, was drawn in the 1920’s and its precise position has been agreed by either side. As a result, several areas of the border region are still contended territory.”
“During the current Syrian Civil War, fighting has occurred – and continues to occur – in and around the area where once Qadesh stood.”
Dr Nielsen who is a Lecturer in Egyptology, hosts a new five-week free course on ‘Warfare and Weapons in Ancient Egypt’, in which anyone can participate for free via the web.