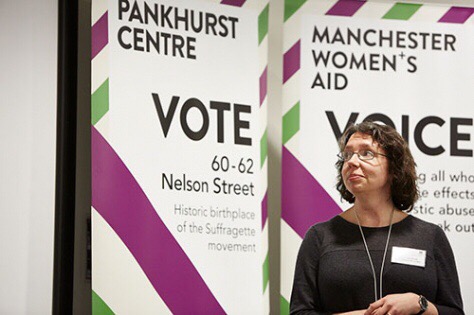 A NEW research centre named in honour of Sylvia Pankhurst was launched on International Women’s Day.
The Sylvia Pankhurst Gender Research Centre provides a home for the “remarkable number” of researchers from across Manchester Metropolitan University who are involved in gender research.

Sylvia, a daughter of Emmeline Pankhurst, was the most imprisoned suffragette and also one of Manchester Met’s alumni, having been a prize-winning student in the Manchester School of Art at the beginning of the 20th Century. Manchester Councillor Andrew Simcock was among the visitors to the Launch event. Mr Simcock is the moving force behind the proposal for a statue of Emmeline Pankhurst (Sylvia’s mother) for Manchester.

Dr Kate Cook, Senior Lecturer in Law, enthralled the audience with a biographic view of Sylvia’s life which – as well as women’s suffrage – included activism in support of causes including class, anti-racism and anti-colonialism.

The event included an inaugural lecture by Professor Julia Rouse who is co-leading the new research centre with Dr Kate Cook. Julia’s talk on “Bumps, Babies, Breasts and Business: What’s Maternity Like in Small Firms?” raised a series of interesting and perplexing issues faced by women who are self-employed and who have babies. Maternity and baby-care are, Julia told the audience, “a messy business” and both gender and class forces create barriers for women coping during self-employment, in the absence of proper state support.

Dr Kay Lalor, a Leverhulme Trust Early Career Fellow in Manchester School of Law, concluded the launch with “The Highlights and Hopes” of the new research centre. Its themes include gendered workplaces, violence against women and girls, sexualities and gender identities. The audience drew in prestigious academics from neighbouring Universities and practitioners that will help Manchester Met create real impact from its gender research.

The wealth gap between the top and middle tenth of households in the UK...