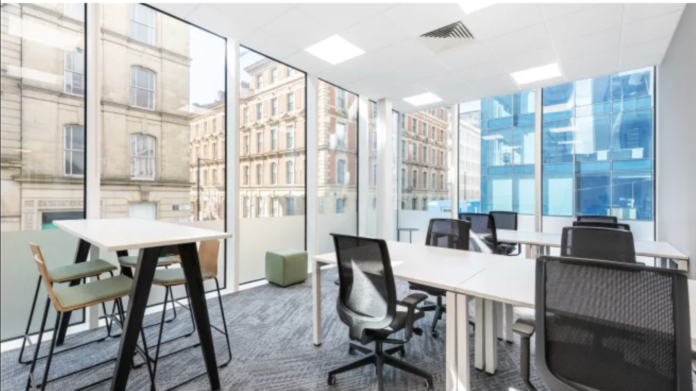 IWG, the world’s largest flexible workspace company with brands including Spaces and Regus, is opening a state-of-the-art co-working space in Altrincham.

Greater  Manchester is one of the UK’s fastest growing regional centres and is home to over 124,000 companies. Demand for new workspaces in the area has performed strongly in 2022, with the number of enquiries for space in IWG locations continuing to increase with a 27% uplift in the last six months compared to the same period a year earlier.

That demand has led to exceptionally strong  pre-sales, with more than 80% of  space already sold, before the centre opens on May 23, 2022.

The new Regus location will include a state-of-the-art gym and changing facilities, bike hub, barista coffee and 24-hour access and security. It has been developed as a partnership between IWG’s Regus brand and entrepreneurs Brian and Jordan Kennedy.

Situated on Church Street, Regus – Altrincham, Two Four Nine, Lynnfield House is part of a new drive by IWG to meet the sharply rising demand for top class flexible working space, outside of city centres. Instead of commuting into Manchester, workers will have everything they need much closer to home, continuing to strengthen Altrincham’s position as a self-sustaining community.

The four-storey building will provide space for established firms and start-ups, while the flexible floor plan will allow companies to design their own bespoke office spaces.

Workers will be based in a prime location close to everything Altrincham has to offer, from the unique Sugo Pasta Kitchen, an Everyman Cinema and a new Soho House coming to the area soon. Regus – Altrincham, Two Four Nine, Lynnfield House is just 400m away from the town’s transport interchange.

The building is more than just a place of work.  Avant-garde facilities combined with a central location will ensure that Regus – Altrincham, Two Four Nine, Lynnfield House is the perfect place for business, communal and individual growth.

Mark Dixon, CEO & Founder of IWG, commented, “For several decades, we have been at the forefront of hybrid work, empowering people to work more productively and conveniently. More and more workers want to live in a 15 Minute City – where everything they need, including where they work, is within 15 minutes of their home. Locations like Two Four Nine, Lynnfield House are a response to that demand.

Spokesperson Jordan Kennedy, Director of Patrick Properties, commented, “We are delighted to be bringing a first-class product offering in Regus to 249 Altrincham, offering the ultimate flexibility to people and organisations that need it. We believe 249 is an unrivalled product with a state-of-the-art fitness centre and changing facilities.

The attention to detail internally has been further boosted by the involvement of well renowned Cheshire designer, Uber Interiors. With a space being let already off-plan, this is testament to the team of designers, contractors and brand that we are building at 249.”