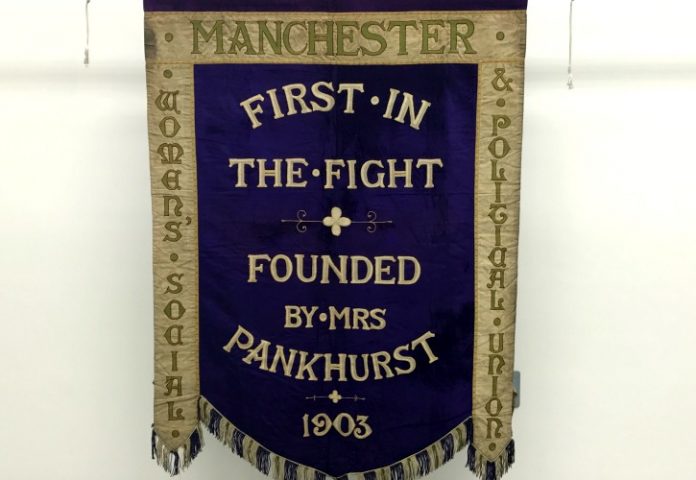 Its been nearly 100 years since some women gained the right to vote in Britain and even longer since the women’s suffrage movement began right here in our city. Returning home to Manchester is the rare historical object of the national suffragette campaign, the Manchester suffragette banner.

The banner is adorned with the words ‘Manchester First in the Fight’, and appeared on the platform alongside Emmeline Pankhurst in some of her most significant speeches. One of which includes the 19 July 1908 Heaton Park rally which saw Pankhurst speak to a crowd of 50,000 people.

Created in 1908 at the height of the Women’s Social and Political Union (WSPU), the banner is the work of the renowned maker, Thomas Brown & Sons. Thomas Brown & Sons were recognised nationally for their outstanding quality and were based in Manchester. After 100 years, the vibrant colour and quality of the banner are indeed a reflection of the care that went into its production.

Despite its appearance at influential suffragette campaigns, a century has passed since the banner has been in the public eye. After recently being discovered in a charity shop in Leeds, the banner went for auction in June where its astonishing value became clear. The way in which the banner was folded in the Halton Moor and Osmondthorpe Project for the Elders charity shop protected the fabric against significant exposure to light and as a result, the banner is miraculously in almost perfect condition.

Thanks to a successful crowd-funding campaign led by the People’s History Museum, combined with the support of the ACE/V&A Purchase Grant Fund and the Heritage Lottery Fund’s Collecting Cultures programme the banner is joining the People’s History Museum’s collection and is set to play a central role in marking the centenary of the first women gaining the right to vote in 2018.

Unsurprisingly, the People’s History Museum has earned its place as a world renowned facility for the conservation and housing of the largest collection of trade political union banners in the world. With the specialist space, design and team of conservation specialists, the People’s History Museum has a well-earned and well-regarded reputation. With the in-house textiles and artefacts specialists, the banners at the museum are carefully maintained and preserved for future generations.

In an exhibition entitled ‘Represent’, the stunningly preserved banner will join other historical items as well as contemporary pieces. From the Suffragette movement to the Donald Trump marches this January, the Represent exhibition will approach the wide subject of voice, having a vote and political representation. The exhibition will run from May until February 2019.

Helen Antrobus, Programme & Events Officer at the People’s History Museum, says, “One of the reasons suffragette artefacts excite such interest is for the way these trailblazers campaigned so creatively.  Alongside banners and placards they used everything from their campaign colours to their own attire to carry their message.  So it will be thrilling to see the Manchester suffragette banner join its place alongside our collection of campaign leaflets, photographs, sashes, ceramics, Pank-a-Squith board game and three banners from Suffragette Atelier, Ilford WPSU and Brighton WSPU”.

The People’s History Museum is open seven days a week; entry is free with a suggested donation of £5 recommended.  For further details visit www.phm.org.uk