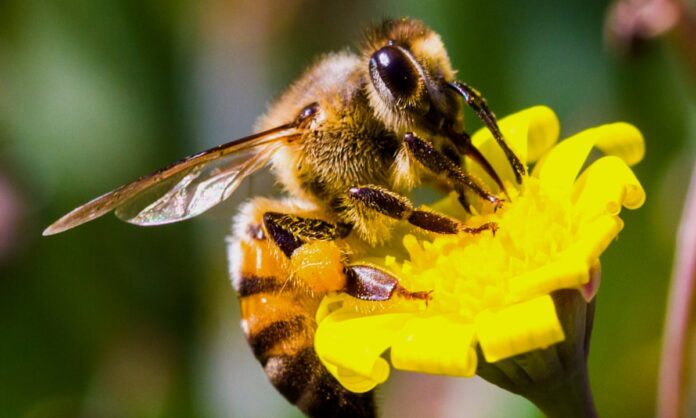 Bumblebees waste no time enjoying the beauty of flowers – instead learning the bare minimum about where to land and find food, new research shows.

A team led by the University of Exeter presented bees with artificial flowers – circles of blue or yellow, or half and half, with sugar solution in the centre.

The artificial flowers were positioned upright, and the flight pattern of bees meant they mostly saw the bottom half of the circles as they came in to land.

When faced with a test circle that had a different arrangement of the two colours, bees paid most attention to whatever colour had appeared in the lower half of the artificial flower they were used to – suggesting they learned just this basic information rather than inspecting and memorising the whole flower prior to landing.

“We know bees have the cognitive capacity to learn a lot of information about a flower,” said Professor Natalie Hempel de Ibarra, Associate Professor at Exeter’s Centre for Research in Animal Behaviour.

“However, our study suggests a simple, low-effort form of learning is good enough in some situations.

First author Dr Keri Langridge, also from the University of Exeter, said: “The bees in our experiments extracted just the information they needed, rather than learning everything that was available to them.

“Why learn a hidden route to the top of the hill when one could simply follow a trail with a big colour sign?”

The research team, including researchers from the universities of Durham and Auckland, presented bees with various versions of the foraging training and tasks.

Some bees were trained with a circle split into two uneven colour parts – either mostly yellow or mostly blue, which changed their flight patterns.

The test results in this case were more complex than after learning circles that were split 50/50, suggesting the bees had paid some attention to contrast edges as well as colour during training flights.

While sugar solution was provided in the training flights, no reward was given in the test flights that followed the training. The bees were therefore unable to locate the sugar during test flights, so they flew around in front of the test circle – allowing the researchers to see which colour they were drawn to.

Professor Hempel de Ibarra said the study’s findings may provide insights about the evolution of flowers, whose colourful patterns can help pollinators such as bees to quickly and safely land.