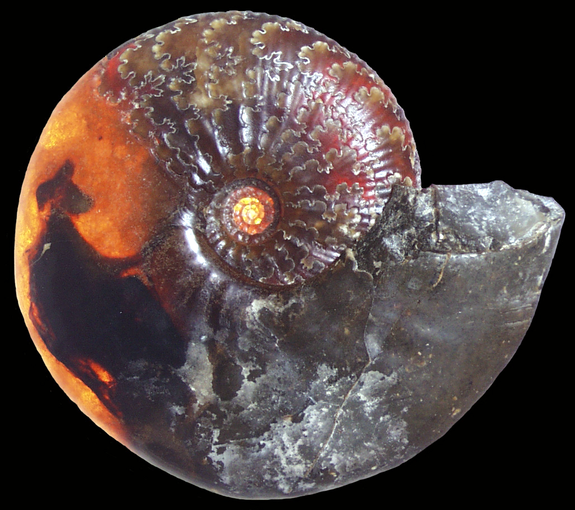 Reseachers haveprovided the first ever 3D visualisation of an ammonite – a marine mollusc group that became extinct with the dinosaurs around 66 million years ago.

The new images have allowed the team to analyse the muscles and organs of an ammonite for the very first time, throwing new light on how the cephalopod mollusc was able to swim through the oceans and defend itself from predators.

The arrangement and relative strength of muscles reveal that ammonites swam by jet propulsion using the hyponome – a muscular tube-like funnel through which water is expelled – as found today in other cephalopods like modern squid and octopuses.

Paired muscles from the ammonite body enabled the ammonite to retract itself deep into its shell for protection, the images also revealed This would have been important since ammonites lacked defensive features such as the ink sac found in modern squid and cuttlefish, and the plate-like hood of Nautilus.

Publishing their findings today in Geology, the team say the findings add more insight and evidence that ammonites might be evolutionarily closer to coleoids, the sub-group of animals containing squid, octopuses and cuttlefish, than previously thought.

Up until now, because ammonite soft tissues are so rarely preserved, scientists have used the modern cephalopod Nautilus, which still swims in our oceans, as a body-plan for reconstructing ammonite biology.

In both groups, a buoyant coiled shell houses the soft body.

However, the new study highlights that ammonites and Nautilus may not be as similar as previously thought.

The study’s lead author Dr Lesley Cherns, from Cardiff University’s School of Earth and Environmental Sciences, said: “Preservation of soft parts is exceptionally rare in ammonites, even in comparison to fossils of closely related animals like squid. We found evidence for muscles that are not present in Nautilus, which provided important new insights into the anatomy and functional morphology of ammonites.”

Ammonites, which became extinct around 66 million years ago, once thrived in the oceans while dinosaurs ruled the Earth. They are among the most common fossils worldwide and are excellent index fossils for dating rocks, linking the rock layer in which a particular species or genus is found to specific geological time periods.

However, almost everything we know about them so far is based on their hard shells as these are more easily preserved over millennia than bodily tissues.

The fossil used in the new study was originally found within Jurassic rocks exposed at a site in Gloucestershire, UK in 1998.

The specimen is now housed at the National Museum Wales in Cardiff.

Study co-author Dr Alan Spencer, from Imperial College London and the Natural History Museum, said: “This ammonite is remarkably well preserved, which is very rare. New imaging techniques allowed us to visualise the internal soft parts of ammonites that have so far resisted all our previous efforts to describe them. This is a major breakthrough in ammonite palaeobiology.”

By combining high-resolution X-ray and high-contrast neutron imaging, the team created a detailed 3D computer reconstruction of the muscles and organs inside the ammonite fossil based on the remnant soft tissues and muscle scars inside the shell. From this detailed model of muscle structure showing relative size and orientation, they were able to infer their functions.

Dr Imran Rahman, a co-author and Principal Researcher at the Natural History Museum, added: “Our study suggests that combining different imaging techniques can be crucial for investigating the soft tissues of three-dimensional fossils. This opens up a range of exciting possibilities for studying the internal structure of exceptionally-preserved specimens. We will be busy.”

Dr Cherns continued: “Since the discovery of the fossil over 20 years ago, we have used numerous techniques to try to decipher the soft tissues, and have resisted the option of cutting it apart and hence destroying a unique specimen to see what is inside. We preferred to wait for the development of new, non-destructive technology – as now used in this study – to understand those internal features without harm to the fossil.

“The result has rewarded patience and utilises outstanding advances in imaging technology for palaeontology. It also highlights the exciting potential of such techniques for the wider study of well-preserved fossils.”