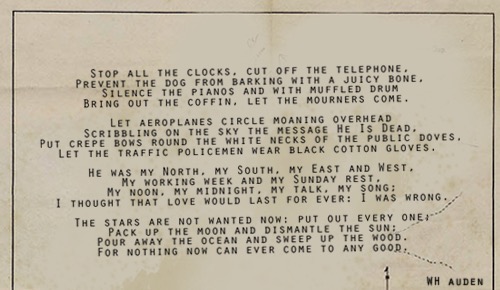 As the nation celebrates the life of Shakespeare on what would have been his 453rd birthday this Sunday, Manchester based Co-op Funeralcare has revealed that when it comes to saying goodbye to loved ones, we often find ourselves lost for words.
A eulogy refers to a tribute to someone in the form of a speech or a piece of writing, yet almost half (42%) of UK adults surveyed had no idea what a eulogy was.

The new findings are based on both consumer research and internal insights from the UK’s leading Funeralcare provider, which undertakes almost 100,000 funerals every year.
With such a lack of awareness, it comes as no surprise that a huge 81% of the nation have never told their loved ones what eulogy they would like at their own funeral and half of us (52%) have never even thought about it.

The Co-op has also uncovered the significance of poetry as part of a eulogy, with over a third (35%) of UK adults claiming they last encountered a poem when saying goodbye to a loved one.
Out of the 21% of UK adults who’ve had to deliver a eulogy, almost two thirds (66%) found it particularly hard due to it being such an emotional time or because they couldn’t find the right words, which is perhaps why turning to literature and poetry is such a popular choice.

The Co-op’s internal insights further confirms this, with three quarters of Funeral Directors agreeing that poems are the most common choice as part of a eulogy.

When delving into the UK’s top funeral poetry choices, the Co-op found the 10 most popular are:
Do Not Stand At My Grave And Weep – Mary Elizabeth Frye

Song – Christina Rossetti (Also known as ‘When I am dead, my dearest’)

If I Should Go Tomorrow – Author Unknown

Death is Nothing At All – Canon Henry Scott-Holland

As well as the evident popularity of poetry at funerals, almost half (43%) of Co-op’s Funeral Directors have revealed that they’ve seen a rise in people leaving behind personal eulogies, allowing loved ones to deliver pre-written tributes and making it much easier for those bereaved to find the right words.

Funerals are very much about personal choice and reflecting the personality and interests of an individual. This is becoming increasingly evident through the growth we’ve seen in people choosing to pre-plan their own ceremonies using a funeral plan.

Eulogies play a huge role in making a ceremony personal, whether it’s a poem, a religious reading or memory of a life well lived.

With over two fifths of people unable to define the term eulogy, it highlights how we struggle to talk about death with our loved ones but doing so makes it much easier for friends and family at what can be an incredibly difficult time.