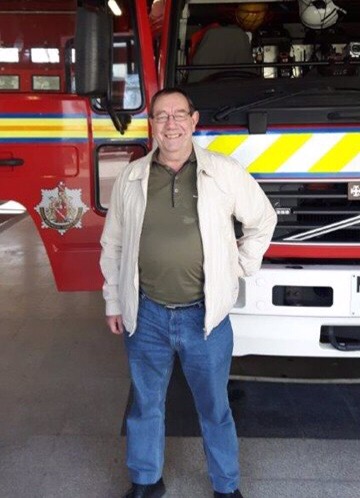 A SALE MAN has thanked firefighters from Greater Manchester Fire and Rescue Service (GMFRS) for saving his life after he suffered a cardiac arrest at a local pub.
Steve Wright, from Sale, was in the JP Joule pub in the town when he collapsed suffering from a suspected cardiac arrest.

Red Watch from Sale Community Fire Station were sent to the scene and arrived within minutes – meaning they were able to immediately administer CPR and shock Steve using a defibrillator held on the fire engine.

Colleagues from North West Ambulance Service (NWAS) arrived on the scene shortly afterwards to provide specialist care and they took Steve to hospital. Thanks to the early treatment he received, Steve made a remarkable recovering following the incident in December 2015.

He recently paid a visit to the fire station on Cranleigh Drive to thank the crews for their life-saving actions.

Steve, who is well on the way to making a full recovery, said: “I had two pints in my hands and I went down like a sack of spuds. The next thing I remember is coming round with a firefighter leaning over me.

“What they did was brilliant and I can’t thank them enough. Whoever came up with the idea of firefighters doing this work and carrying a defibrillator on the engine deserves a medal.

“The cardiac consultant told me I was only the second patient he had seen survive such an attack. He told me that had the firefighters not been there so fast, I would most probably have died. They saved my life.

“It turned out that I had a major blockage in an artery and had to have stents fitted. I am a very lucky lad. If it wasn’t for the firefighters I wouldn’t be here.

“I found out later that they went straight from saving me to a fire down the road in Stretford. It never stops for them and they just get on with the job professionally.”

Firefighter David Kendal said: “We were the first on scene and immediately started CPR and used a defibrillator. After two shocks and continued CPR he came around as paramedics arrived. They took over and after some further attention he was taken to hospital where it was confirmed he had suffered a cardiac arrest.”

Chair of Greater Manchester Fire and Rescue Authority, Councillor David Acton, said: “The initiative has allowed us to build on our partnership with NWAS and it has proved to be a real success.

“Responding to cardiac arrests is now part of the daily routine of firefighters in Greater Manchester and they are able to use their training, skills and experience to support paramedics and perform CPR to give a casualty the best possible chance of survival.”

Four Salford lads have been named as the most inspiring young people in the...