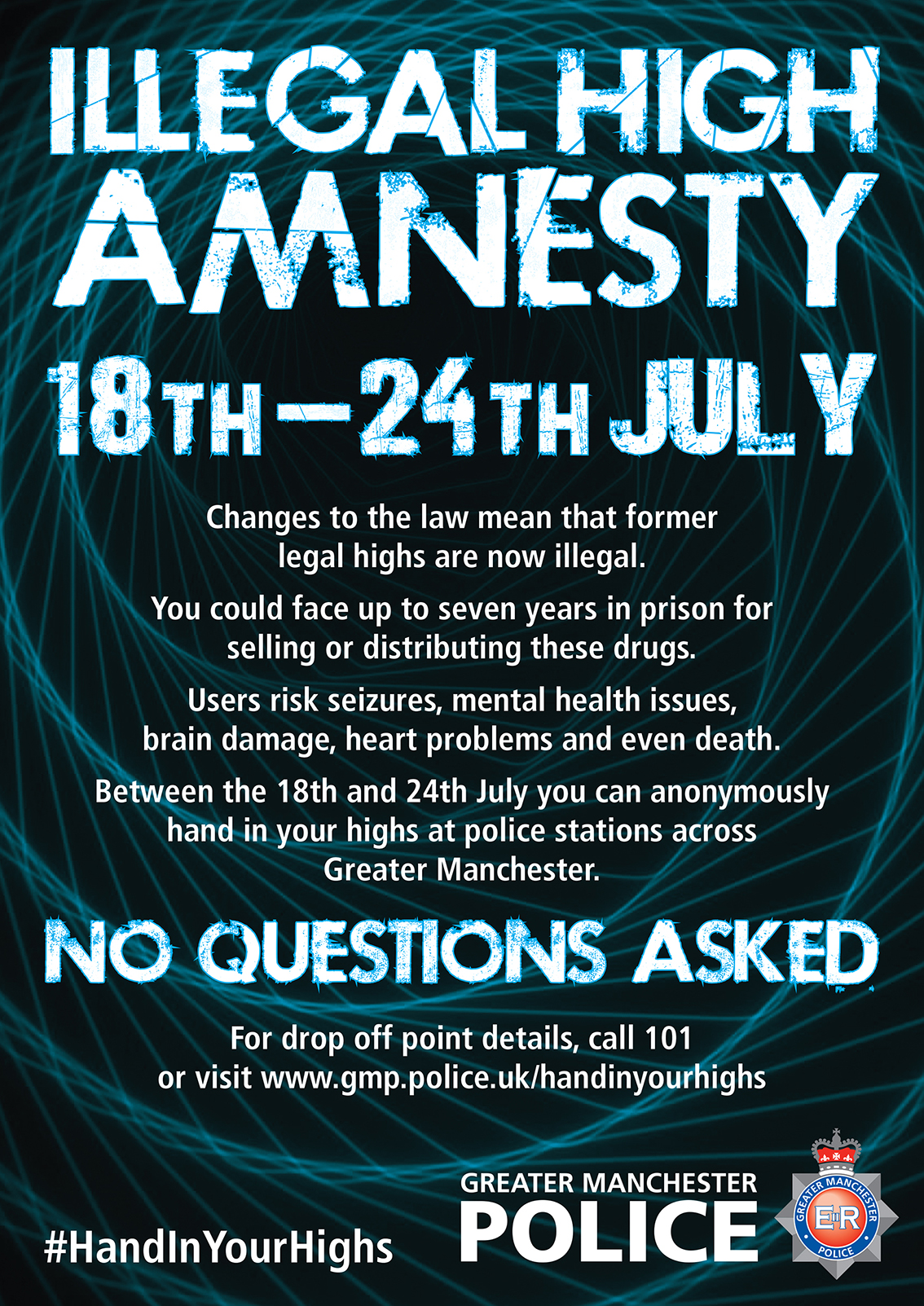 Greater Manchester Police (GMP) is appealing for people to ‘hand in their highs’ as part of a week-long amnesty.

New Psychoactive Substances (NPS), previously known as ‘legal highs’, used to be readily available from retail outlets but the introduction of ‘The Psychoactive Substances Act’ in May has made it illegal to sell, supply or import these drugs.‘Illegal highs’ are engineered to have a similar effect on users as drugs such as cocaine or cannabis. As there is no regulation with these drugs ingredients and strength can vary between batches.As well as being highly addictive, some users have experienced seizures, mental health issues, brain damage and heart problems.  NPS have also been linked to a number of deaths.

The amnesty, which takes place 18 – 24 July, allows retailers to get rid of any stock they may still have, without any questions asked. Users are also encouraged to put their health first and get rid of their highs before they make themselves or others ill or worse. GMP is keen to stress that no personal information will be taken and the process will be completely anonymous.

Assistant Chief Constable Rob Potts said: “Calling these drugs ‘legal highs’ gives a false impression to the public and puts lives at risk. Shop owners need to be aware in the change of the law. These drugs are now illegal to supply, even for free.

“To users of these psychoactive substances, my strong advice is don’t risk your health or that of your friends. This amnesty provides an ideal opportunity for anyone to dispose of these illegal drugs safely at any police station across Greater Manchester. You won’t be asked for any information.”

Greater Manchester Mayor and Police and Crime Commissioner Tony Lloyd said: “We have seen first-hand here in Greater Manchester the damage these substances can do to the people that use them, often ending up in the hands of young people who have no idea what it is they are taking.

“This amnesty is a positive step in working together – police, health, trading standards, and local people – to raise awareness of the dangers of these drugs, tackle those who sell them and ultimately, save heartache and  lives.”

For more information on the opening times of your nearest amnesty drop off point, please visit www.gmp.police.uk/handinyourhighs

Follow the conversation on social media using the hashtag #HandInYourHighs