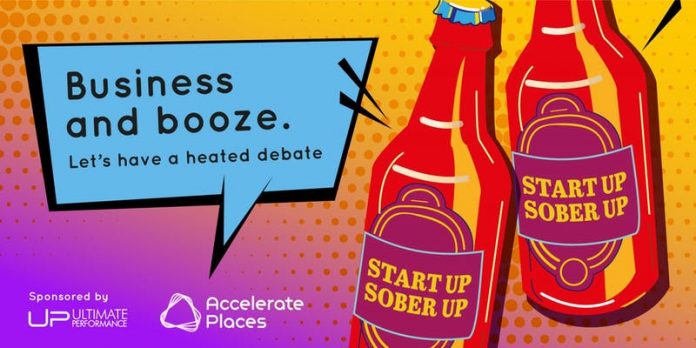 Drinking and networking often go hand in hand but for start-ups trying to get a foot in the door, is it healthy for business?

Manchester entrepreneurs are being invited to attend a live debate on the issue at Accelerate Places Manchester on Tuesday 20th November, including a panel of experts including Social Chain co-founder, Dominic McGregor. Dominic gave up drinking two years ago for the benefit of his mental health and claims it has had a significant impact on his business.

During the evening, esteemed entrepreneurs from across the city will be asking; “Does the Manchester start-up scene have a drink problem?”; “Does drinking help you to network?”; and “Is it possible to run a successful business without drinking and socialising?”.

The lively debate, which is free to attend, will be chaired by Simon Calderbank, of Big Knows and co-founder of Twitfaced Events, who will also be joined by panellists Naomi Timperley, co-founder of Tech North Advocates, Mark Bohannon, head of Ultimate Performance (UP North), and Lisa Murgatroyd, business manager at Accelerate Places Manchester.

Panellist, Dominic McGregor, said: “This is going to be a really interesting night tackling an issue that is very close to my heart. Starting a business takes a lot of hard work and determination so I believe you have to be in peak shape, mentally and physically, to succeed. For me personally, giving up the booze has been instrumental to my success but I can’t wait to hear what others have to say on the issue. Let the debate begin.”

Simon Calderbank, chair of the Start-up, Sober-up event panel, said: ““Drinking has always played its part in the workplace since time immemorial! And with more people than ever keen to network to promote their start-ups, it’s not just the early morning business events that grab our attention. After-work networking events are now ten-fold in town so yes, alcohol has become an obvious ingredient. Having enjoyed networking and connecting people for as long as I can recall, and run many an event where booze has certainly played a role, I am really curious to hear the good, the bad and who knows, the ugly of Manchester’s business drinking culture.”

Lisa Murgatroyd, business manager at Accelerate Places Manchester, said: “In Manchester, business is booming and we are fortunate to have a growing number of innovative and inspiring start-ups and entrepreneurs in our city.

“The role alcohol plays in this evolving culture is fascinating and often individuals just starting out in business aren’t sure whether drinking is a help or hinderance when you’re serious about starting a business.

“We are hosting this event to try and engage with start-ups and entrepreneurs to find out what they think and I’m sure it will a very lively debate.”

The debate kicks off at 5.30pm and concludes at 7.30pm. Drinks (alcoholic and non-alcoholic) and refreshments will be available on the night.

The Return of the Prodigal Son