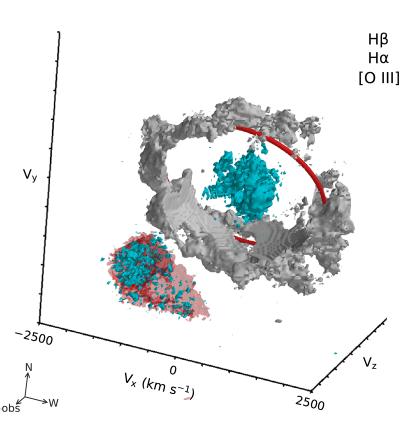 A 1,000-year-old supernova has been captured in 3D images that reveal yet unseen details of the elements that are ejected when a star explodes. Analysis of data collected by the University of Warwick from the Multi-Unit Spectroscopic Explorer (MUSE) and X-shooter at the European Southern Observatory’s (ESO) Very Large Telescope (VLT), offers new insights into how stars self-destruct.

The new study authored by Josefin Larsson, an astrophysicist at KTH Royal Institute of Technology, in collaboration with researchers at the University of Warwick, Stockholm University and at ESO, is published in the Astrophysical Journal.

The supernova that the researchers studied, known as SNR 0540-69.3, is a familiar subject. For those observing the remnants of exploded stars, it’s one of the sky’s go-to supernovae, thanks to its relative proximity in the Large Magellanic Cloud, a small neighbouring galaxy about 160,000 light years from Earth.

Yet SNR 0540-69.3 still has stories to tell. The new observations reveal the distribution of ejected material in unprecedented detail, leading to two new discoveries: a large ring of oxygen surrounding the supernova remnant’s innermost regions, and a mysterious blob of hydrogen unlike anything previously seen in other supernova remnants.

The 3D distribution of ejecta from supernova SNR 0540-69.3 is shown in individual colours (above). Oxygen can be seen in grey, and hydrogen appears in turquoise and red. The oxygen in the innermost region has been removed, so that only the outer ring is shown. A red circle is included for reference to guide the eye. The newly discovered hydrogen blob is seen to the lower left.

The study provides a three-dimensional map of the distribution of the ejected elements, in the forms of rings and clumps which carry significant information about the progenitor star and the explosion mechanism. 3D mapping of these enables researchers to test theoretical models, adding to the growing body of evidence that such structures are omnipresent features of supernova ejecta.

Dr Joseph Lyman of the University of Warwick leads the programme that collected the data for the study. He said: “There are huge gaps in our understanding of how exactly massive stars explode as supernovae. Powerful computer simulations can show us what we think happens in the first second or so of the explosion, but linking that to what we observe in distant supernovae, which appear like single points on the night sky, is not easy. 3D data on historical supernovae remnants, such as SNR 0540-69.3, help us bridge this gap by providing us with a view of a supernova ‘up close’. We then use these 3D data to study in detail the imprint the explosion left on the star.”

“These ejecta have been traveling for a thousand years—it’s been a free expansion since the explosion,” Josefin Larsson says. “So it’s really telling us about the conditions at the time of the explosion.”
Larsson says that the results highlight the importance of asymmetries and mixing in supernova explosions. “What we see in the explosion is that all the elements get mixed. The original structure of the star is disrupted, and it’s clearly not symmetrical,” Larsson says.

Through fusion, stars evolve to form heavier elements at their core as nuclei combine into heavier nuclei. The evolution resembles an onion, with layers of gradually heavier elements forming inward. When a star explodes, the innermost core collapses to form a neutron star — but the outer layers of sulfur, argon, oxygen and hydrogen among other elements, are mixed and ejected in what Larsson describes as an “asymmetric distribution of rings and clumps.”

Rings of ejecta have been observed in a small number of other nearby supernova remnants, but the particular case of SNR 0540 adds valuable new information by revealing small-scale rings in the very innermost regions in a way not seen in those other cases.

Larsson says she is intrigued by the origin of the hydrogen blob. “Is it part of the material ejected in the explosion?” she asks, “Or, maybe it was blown off from the outer layers of a binary companion star.”

The explosions of supernovae are critical to understanding the contents of the universe, she says. “They spread elements formed in the star and in the explosion itself. Without stars and supernovae, we would essentially only have hydrogen and helium in the universe.”

How Ancient Britains racked up the food miles