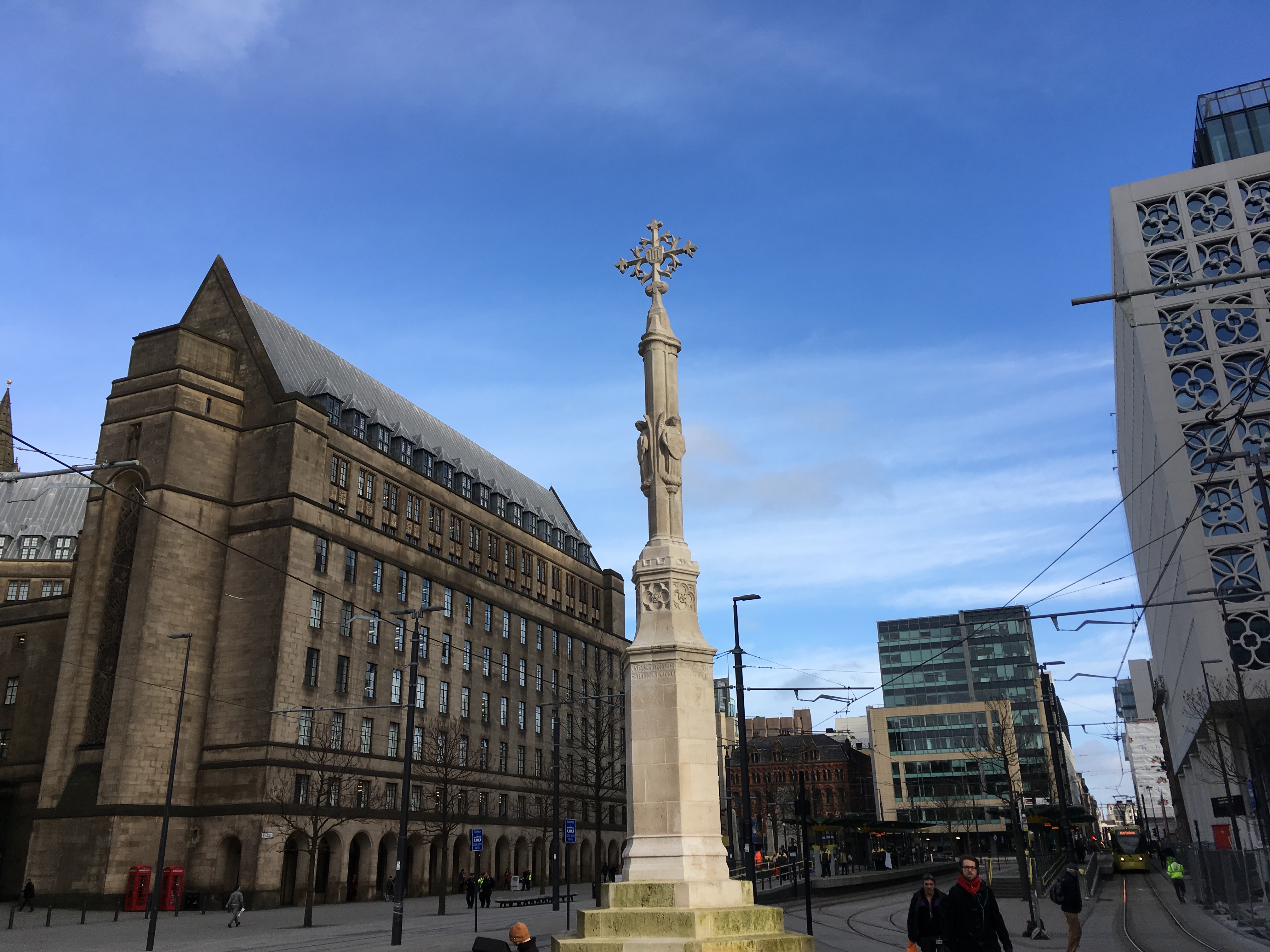 The Bishop of Manchester, David Walker, will be leading a ceremony to bless the historic St Peter’s Square cross, as the square’s transformation celebrates its final phase.

The Bishop will be joined by Sir Richard Leese, Leader of Manchester City Council, along with city centre members, officers from Transport for Greater Manchester (TfGM) and local businesses to celebrate the milestone.

The cross marks the site of the St Peter’s Square church that stood on the spot from 1788, from which the Square is named (then known as St Peter’s Fields), until 1907. The church was demolished in 1907 and the stone scross, designed by architect Temple Moor, was erected in 1908.

Since 2013, St Peter’s Square has been the site of huge transformation, including the Metrolink expansion and a new St Peter’s Square tram stop, the relocation of the cenotaph and significant redevelopment of the surrounding property.

The crypt is thought to date back to 1788 when St Peter Church was first built and likely sealed when the church was demolished in 1907. Metrolink uncovered and resealed the burial vaults, which still contain the graves of those buried there, before covering the crypt with 750 tonnes of concrete to protect it into the future.

The final phase of the transformation is now underway and will be completed this coming spring.

Sir Richard Leese Leader of Manchester City Council, said: “There is sometimes a tendency during major development to fix our sights firmly ahead, but it is sometimes good to take a moment and remember our city’s history and heritage and understand how it fits with our present and future.

“Marrying the city’s past with our ambitions as a growing, ambitious city is a balance that we try and get right. I think this is captured beautifully here as the transformation of St Peter’s Square nears completion. The city’s civic treasures – the Central Library, Town Hall estate and cenotaph – sit wonderfully with the redevelopment of the Square and surrounding buildings.

“St Peter’s Square is fast becoming a key city centre space that will be a haven for city workers and visitors alike.”

Bishop of Manchester David Walker, said: “St Peter’s Church stood here through the formative years of Manchester’s development into the world’s first industrial city. It witnessed the massacre of 1819 – the event which serves as a permanent reminder of the importance of upholding Manchester’s democratic traditions. The demolition of the church, over a century ago, reflects that the massive redevelopment of the last few years is nothing new to this city, but one more phase in this life. So it is very fitting that we rededicate this spot, sacred both to those who remains are interred here, and to Manchester itself.”

Water restrictions could be on the way say United Utilities