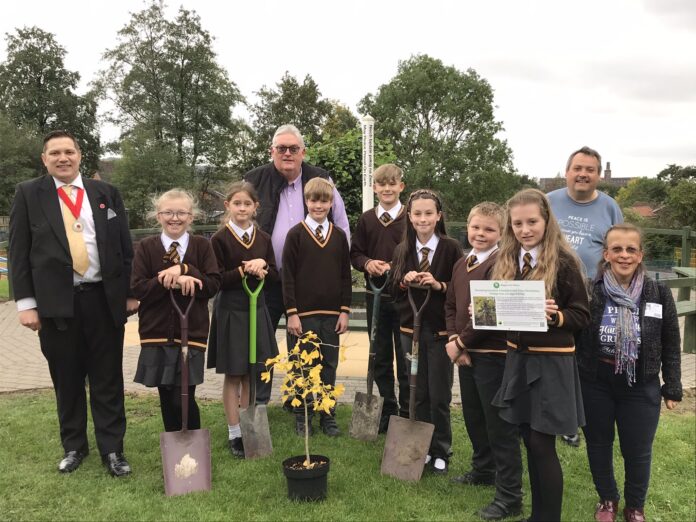 St Joseph’s RC Primary School, Shaw has become only the second Oldham school to receive a tree of peace from the Mayor of Hiroshima.

The school is a signatory to the Pledge to Peace, an initiative launched in the European Parliament in November 2011. Signatory organisations pledge to carry out acts of peace in their communities and across communities.

St Joseph’s is one of twenty-six schools and colleges in Oldham to have signed the pledge.

In 2017 and 2018, pupils from the school made paper peace cranes to send to Hiroshima for display in the memorial garden in remembrance of the children who died in the atomic bombing of the city on August 6, 1945.

Now the school has received a sapling grown from a seed that was sourced from a city-centre tree which survived that bombing.

The first sapling was planted at Ss Aidans and Oswalds in Royton on the UN International Day of Peace, 21 September.

Also present was the Vice Chair and Secretary of The Oldham Pledge to Peace Forum, Maria Ellis and Richard Outram.

Headteacher Garry Needle said: “We had a fantastic afternoon today with our pupils and peace partners planting a tree whose mother was a survivor of the Hiroshima nuclear bomb in WW2. This tree represents a great symbol of hope and the power of nature”.

Shaw and Crompton Parish Council has also signed the Pledge. Councillor Hamblett, who serves as Parish Council Peace Champion, added: “Sadly, war represents the worst that humanity is capable of. The atomic bombing of Hiroshima was one of the most terrible acts carried out in any war and must never be repeated.”

“This tree, the offspring of a mother tree which survived that attack, not only demonstrates nature’s capacity for rebirth after destruction, but symbolizes the absolute imperative for humanity to sustain and not harm our planet and to live in peace rather than perpetual conflict”.

A brand new concept is coming to Anocats with an aim to tackle homeless!

Four hubs set up across Rochdale during Coronavirus pandemic