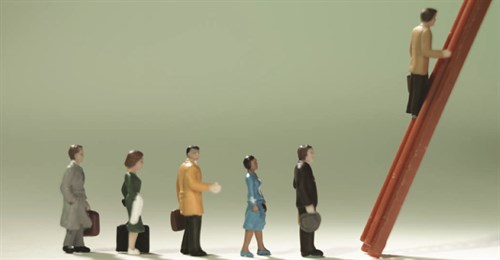 The Social Mobility Commission’s sixth annual State of the National report, published today, says ‘social mobility has stagnated over the last four years at virtually all stages from birth to work’.

Commission chair Dame Martina Milburn says ‘our big concern is not stagnation but, as time goes by, that it will actually get worse’.

The report highlights that inequality is entrenched in Britain, from birth to work and that being born privileged means you are likely to remain priviledged, whilst being born disavantaged means you may have to overcome barriers to improve you and your children’s social mobility.

The report says that urgent action needs to be taken to help close the privilege gap.

The Commission highlights the closure of hundreds of children’s centres and calls for an extension of 30 hours childcare to more disadvantaged parents.

It is shocking too that 45 per cent of childcare workers are on benefit or tax credits say the authors.

School funding has been cut back by 8 per cent since 2010 which has affected schools’ ability to deliver services and the commission calls on the Government to consider whether the Pupil Premium is effectively targeted and whether differential levels of funding might be more beneficial for those with long term disadvantage.

At 16 disadvantaged students are more likely to enter further education than school sixth forms but the FE sector is overlooked and needs funds to give students high quality education.

While in the work place those with the least skills are the least likely to get training and degree apprenticeships tend to go to the better off. Those from working class backgrounds are also more likely to be paid less than the voluntary living wage.

Those from better off backgrounds are almost 80 percent more likely to be in a professional job than their working class peers.

The report says that Social mobility has remained virtually stagnant since 2014.

“At a time when we need clear leadership in solving poverty and improving social mobility, our country is drifting in the wrong direction. The Commission’s report today reinforces what we have been seeing for some time: more people trapped on low incomes and unable to build a better life.

“It’s unacceptable that there is a widening gulf between the reality in the UK and the sort of country we all want to live in. No child should have their prospects limited because of their background. But all too often the support available to people is not enough to overcome the forces holding them back.

“Low pay and high costs as well as serious regional inequalities are forcing many people into a corner and constraining their ability to seize new opportunities. The Government should urgently prioritise  investing in skills and better-paid jobs in places where people are locked out of opportunity. This is crucial if we are to strike at the heart of this issue and build an inclusive economy.”

Everyone has heard of King Arthur, but 90% of medieval manuscripts of chivalric and...