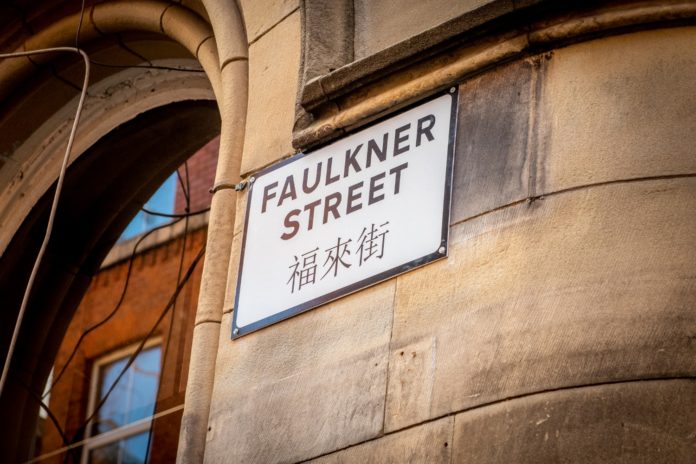 New signs in both English and Chinese welcoming people to Manchester’s China Town have been unveiled by the council ahead of a new festival this weekend.

This year sees the launch of the Manchester Moon Festival, a two-day celebration reflecting the traditional Chinese harvest festival. It is hoped the event – which features colourful lantern displays, live music, craft stalls and a variety of street food stalls in the Faulkner Street  car park from noon to 8pm both days– will become a regular fixture.

Workshops throughout the day will give people the chance to have a go at making traditional mooncakes, Kung Fu, Chinese painting and lantern making.

The 20 new signs, giving street names in both English and Chinese, are part of the council’s commitment to supporting improvements to the area and building on its distinctive identity.

It follows the well-attended inaugural meeting last week of the new We Love China Town group which aims to bring people together to co-ordinate ideas to drive improvements for both the local community and visitors alike.

Sir Richard Leese, Leader of Manchester City Council, said: “There is a lot of energy and endeavour going into helping China Town build on its strengths and address some of its challenges. Manchester’s established Chinese community has played a big part in the life of this city and we believe that these new developments, from the festival to the signage and the We Love China Town group are testament to that enduring character and vibrancy.

Raymond Chan, chairman of the Manchester China Town Business Association, said: “On behalf of the Chinese community we are delighted to see the Chinese and English street names return to China Town. Historically, we had such signs a long time ago and we appreciate the support of Manchester City Council in bringing them back. This year we are also running the Moon Festival with the help of the Chinese community’s younger generation. We look forward to this becoming an annual event.”