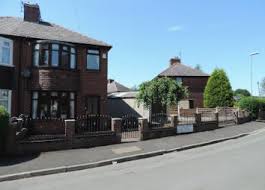 Officers were called to Lynton Avenue to reports that shots had been fired just after 1.00am

A group of men had arrived outside a property on the street and caused damage to the windows as well as a number of cars before fleeing the scene.

Whilst in attendance, officers heard four shots being fired. Nobody was injured during the incident.

Detective Chief Inspector Richard Ennis, of GMP’s Tameside borough, said: “I understand that an incident like this will cause a great deal of concern among residents but I want to assure people that we believe this to be a targeted attack.

“We have a dedicated team of detectives conducting extensive enquiries as well as increasing patrols in response. If anyone has any concerns please don’t hesitate to speak to one of our officers who will be in the area and more than happy to help.

“This happened in the early hours of Saturday morning when people may have been woken up by the disturbance or may have even been coming home from a night out.

“If you saw a group of men acting suspiciously around that time, or know anything that can help us bring these men to justice then please contact us.

“Information will always be treated with the strictest confidence and is vital in helping us to build a full picture of what has happened here.”