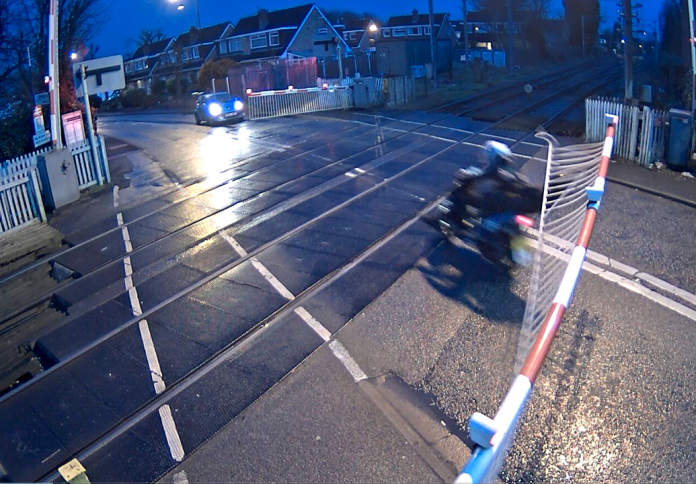 A shocking video has been released showing young people on a moped putting their lives and others at risk as they swerve at speed around safety barriers at a level crossing.

he rider of the moped is seen shamelessly weaving between the barriers at Navigation Road level crossing before his passenger is hit by the second crossing barrier.

The reckless manoeuvre saw the speeding moped narrowly miss the first barriers as they lowered and hitting the second barriers which knocked the passenger off. The rider stopped to pick up the injured passenger before speeding off.

Figures from Network Rail reveal that young people are more likely to have a near miss at a level crossing during the summer – light nights, coupled with the summer holidays, spell extra danger with August and early September seeing near misses at level crossings rise.

While Britain still has the safest rail network in Europe, level crossings are one of the biggest public safety risks on the railway. In the last five years there have been more than 2,000 incidents on level crossings involving young people.

Ben Parish, route level crossing manager for Network Rail, said: “This selfish duo had callous neglect for the safety of themselves and others by ignoring the barriers and flashing signals. Level crossing barriers and warning lights are there to help road users, pedestrians and railway users stay safe. Misusing crossings in this way could result in serious injury or worse.

“I can’t emphasise strongly enough the importance of safe and sensible level crossing use. If anyone has any concerns about a level crossing I would urge them to contact us immediately.”

Brits are a nation of self-proclaimed “wine buffs”, splashing out £988 a year on...