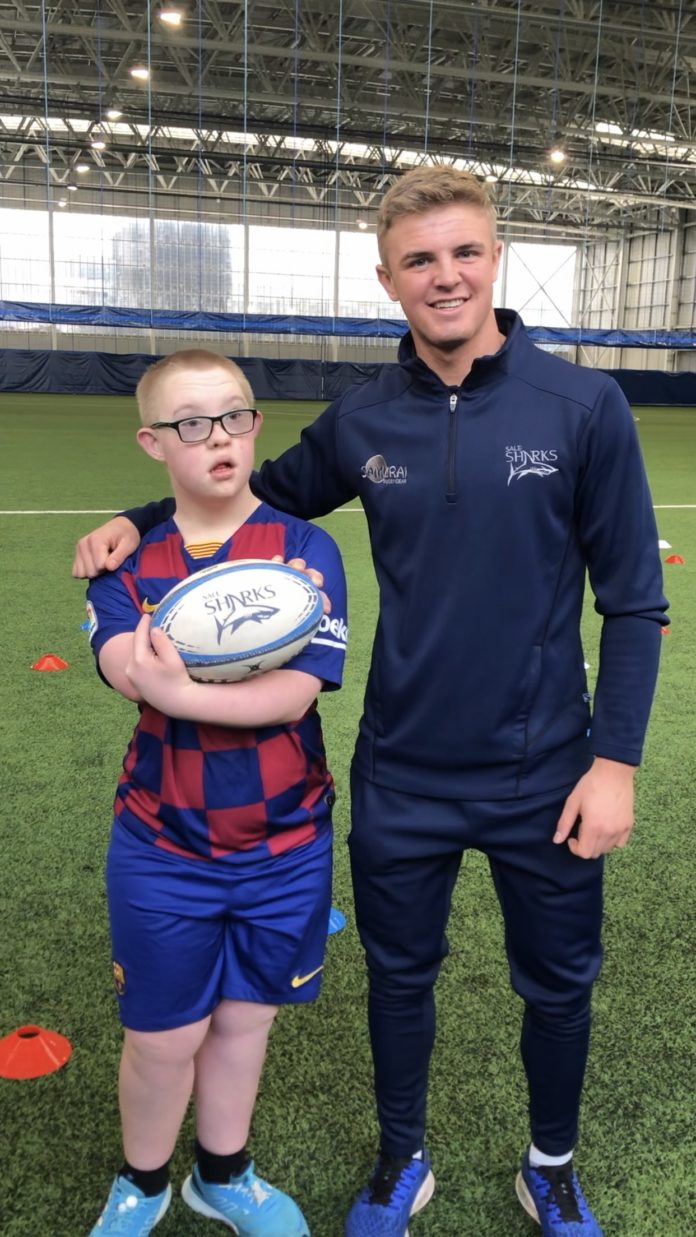 A Manchester-based group that supports children and adults with Down’s syndrome received a surprise visit from three Sale Sharks stars who hosted an action-packed afternoon of tag rugby.

South African Rugby World Cup winner, Lood de Jager, was joined by teammates Josh Beaumont and Tom Curtis for the event at the City Football Academy – a venue used by Manchester City in the Community to provide activities for the Manchester City Down Syndrome group each week.

The group of 25 participants – all between the ages of four and 30 – took part in the rugby session with the Sharks stars, who passed on their top tips and also posed for pictures with the players and their families.

The session was organised by Sale Sharks club partner, Printerland, as part of a wider commitment to inclusiveness and introducing rugby to new audiences.

Thousands of tickets to watch the Premiership Rugby side in action have been given away to charity groups from Greater Manchester as part of the scheme, and all those involved in the tag rugby session also got the chance to watch Sale in action against Saracens on Friday night.

Mark Cueto, ex-England international and now Commercial Director at Sale Sharks said: “The lads had a great time hosting this session and opening up rugby to groups that might not necessarily have had access to the sport before is something we really believe in.

“We work with Printerland on numerous giveaways throughout the season, welcoming different charities to our home games and it’s been a huge success for a number of years now.

Graham Vickers, Managing Director from Printerland added: “Giving back to our local community has always been a big focus for us and we absolutely love using our long-running partnership with Sale Sharks to offer people the chance to see a live Premiership Rugby game.

“The feedback from everyone involved with Manchester City Down Syndrome group has been amazing and we’re thrilled they enjoyed the rugby session and the game on Friday night. We’ve got lots more planned over the next few weeks and we look to continuing to work with the Sale Sharks team to expand rugby’s appeal.”

Jake the latest PAWlice recruit – from rescue to response

The Pop up Inn refreshing the way to find a job is coming to...