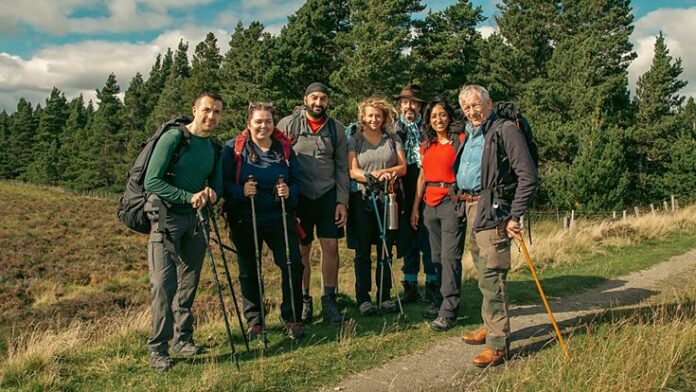 The critically acclaimed series Pilgrimage returns to BBC Two and iPlayer in the Spring with a new three part series, as seven well known personalities of differing faiths and beliefs embark on a journey of religious and spiritual awakening across land and sea, from Ireland to Northern Ireland and Scotland.

Over fifteen days, the seven pilgrims will follow in the footsteps of the sixth century Irish monk, Saint Columba, seeking out his legacy as a key figure in early British Christianity who helped spread the faith from Ireland to Scotland and beyond.

Following ancient pilgrimages and heritage walking trails, the celebrity pilgrims begin their journey in the town of Donegal in the Republic of Ireland, then travel through Northern Ireland and over the sea by boat to western Scotland. From there, they head up towards the Highlands before exploring the Hebridean Isle of Lewis and Harris. They go to Stornaway and then to the Calanais Stones before arriving at their final destination, Iona, a tiny island in the Inner Hebrides and the site of Saint Columba’s most revered monastery. Covering more than 1600km, they visit places of worship, from pagan stones to an early Christian cave and a contemporary mosque and Sikh temple. This journey will test the pilgrims not just spiritually but physically too.

Revealing why joining this pilgrimage is important to them, the celebrity pilgrims commented:

Laurence Llewelyn-Bowen (56) says: “I think pilgrimage is about clearing out your mental closet by physical exertion and by spiritual conversation with yourself or, if you believe it, then conversation with your God… I know I come across as all sort of flouncy and floppy and rather cavalier, but I am capable of existing in the real world. However, I don’t think I’ve walked so far not wearing Cuban heels.”

Nick Hewer (78) says: “I’m doing the Pilgrimage because I’m very curious and I want to know whether what the others believe in is genuine and how they got there and am I missing out on something? I’d hate to think, at the age of 77 with only a few more years left, whether I’m actually, short-changing myself. My greatest fear is the walking… I want to do it in the right spirit because like so many old men, I can be awkward, sometimes…”

Shazia Mirza (39) says: “Growing up there were things that were prescribed to me by my family and my culture and my religion. Obviously, you’re going to rebel against that if you’re hearing it 24 hours a day, seven days a week, all your life. I believe in God. I believe in Allah. I’m Muslim. But just because you believe in Islam doesn’t mean you practice it. I’ve read the Qur-an, the Bible, the Torah…I’ve read a lot of holy books and I have questions about them all… you can’t just believe in all of it. I hope that going on this pilgrimage elevates me to a higher level of being myself.”

Monty Panesar (39) says: “As a Sikh, I believe in Oneness, that we are all connected by an invisible force, a universal energy. Being on this pilgrimage, I’m really interested to learn how Christianity evolved and also learn a bit about myself… I want to see if there is anything about myself that I don’t yet know.”

Scarlett Moffatt (31) says: “At school, I spent a lot of time just reading books and on my own and so that’s how I got into faith really. It just felt calming. There’s almost a stigma attached to sort of being religious. Whenever I would tell my friends, they’d laugh and I’d be like, “why is that funny?” I believe in God, there has to be something that started all this. I would describe myself as Christian, but not a strict Christian. I don’t go to church, but I definitely believe and religion to me is security. In my head somebody on a pilgrimage is in a loin cloth and they have really long hair… and they look a bit dehydrated like they need a good moisturiser mask. I’m doing the pilgrimage as I want to know what my religion is. I want to be able to answer that question with confidence.”

Louisa Clein (42) says: “I’m really looking forward to learning more about what being Jewish means to me. I certainly believe in something; I’m still trying to work out what that is. The religious element of being Jewish for me is a complicated one because I didn’t grow up with any religious education and what that meant to be Jewish and so I was a stranger in a Synagogue. My mother is a Holocaust survivor, so the impact of my mum’s childhood being Jewish was massive… It’s an amazing feeling to see my children learning Hebrew and learning the bible stories and going to Synagogue… I’m learning with them in a way, they’re teaching me.”

Will Bayley (34) said “I wouldn’t say I’m a Christian but I’d say that I believe. I do think there’s a God… I hope there’s a God… faith has always been there… those feelings that someone’s looking after me. When I was in hospital there were always prayers for me…people coming in and actually praying for me. This pilgrimage will push me absolutely to my limits.”

The Pilgrimage series continues to perform well for BBC Two with the third series, Pilgrimage: The Road to Istanbul, having reached around two million viewers when the launch episode aired in April 2020.

Daisy Scalchi, BBC Commissioning Editor, Religion & Ethics, says: “We are thrilled to see the wonderful Pilgrimage return for Spring 2022. This is an exceptional cast bringing a wide variety of perspectives to some of life’s big questions, at a time when conversations around meaning and values are more important than ever.”

Caroline Matthews, Executive Producer and CEO, CTVC says: “I am absolutely delighted that Pilgrimage has returned for a fourth series. I’m incredibly proud of this series and for the conversations around faith between our celebrity pilgrims. It’s truly fascinating to watch and I hope those conversations will extend to our audience, regardless of their religious beliefs.”