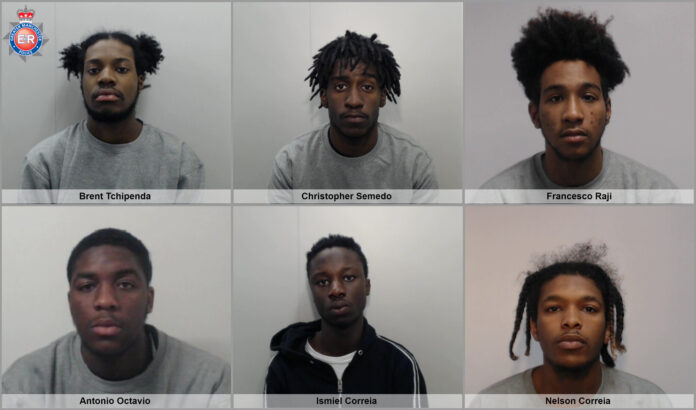 Manchester Crown Court was told that a group of 13 males were walking along Moston Lane in the direction of Kenyon Lane, Moston. As they reached the junction, the group begin to run down Kenyon Lane and pull out weapons.

It was at this point the group ran at another group of males – that included John Soyoye – and began to swing machetes and other weapons, including bats, at them.

Brent Tchipenda began to fight with John but he and the smaller group attempted to flee the larger group after they all realised John had been injured.

These injuries caused him to fall to the ground where he was surrounded by nine of the males and subjected to a violent attack as they all continually struck, stabbed, slashed and kicked him. This attack was also filmed by one of the group.

Shocked members of the public came to John’s aid. Sadly, he died at the scene.

The larger group fled the area with some of that group jumping into a taxi and heading to Royal Oldham Hospital due to Tchipenda’s injuries.

Having arrived at the Royal Oldham Hospital, Tchipenda headed into A&E alone and told staff that he had been the victim of an assault in Oldham. The others who were with Tchipenda in the taxi split off, taking his rucksack and blood stained outer clothing with them.

Later that evening, detectives completed enquiries at local hospitals and were suspicious of Tchipenda’s explanation as to how he came by his injuries. As a result, Tchipenda was arrested on suspicion of Murder.

Francesco Raji, Christopher Semedo, Nelson Correia, Octavio Antonio and a 16-year-old boy who cannot be named were all subsequently arrested later that month and items were seized, including phones and clothing that were used on the night of the murder.

Examination of the 16-year-old’s phones also uncovered drill lyrics written as notes on 7 November making reference to the death of ‘MD’, a nickname used by John Soyoye. A video was also uncovered with two of the attackers bragging about the murder.

Octavio Antonio was arrested trying to board a train at St Pancras International train station having earlier been circulated as wanted by the investigation team. Ismael Correia was later arrested on 23 December.

Following an 11 week trial between October and December 2021,Francesco Raji aged 21 and Christopher Semedo aged 24 , both of Elm Road, Oldham were jailed for 21 years and 24 years respectively.

Nelson Correria 21 of Petworth Road, Oldham was jailed for 23 and a half years and a 16-year-old boy who cannot be named for legal reasons was jailed for 16 years.
All seven were found guilty of murder and violent disorder.

Mohammed Al-Jaf aged 21 of Bradney Close, Manchester was found not guilty of murder but guilty of manslaughter and violent disorder and is due to be sentenced at a later date.

The remaining five suspects are still sought for questioning and are believed to have left the UK shortly after the Murder.

Detective Chief Inspector Gareth Davies of GMP’s Major Incident Team said: “This was a horrific, violent and senseless assault that cost a young boy his life. Thankfully no innocent bystanders were injured in the disorder but the result could have been even more devastating.

“No family or parent should ever have to receive the news from police that their son or daughter has been brutally murdered in the street. I know that this trial has been incredibly difficult for John’s family and I hope that the sentences received earlier this year has given them at least a small sense of justice and closure.

“Knives ruin lives – not only for the families impacted by knife crime but also for those who carry them. Eight young men now face a significant amount of time in prison and I hope that this sends a strong warning that carrying and using knives carries a significant consequence and GMP will do all it can to ensure those responsible are apprehended and face the appropriate justice.”

Jailed for six years for manslaughter after she knifed man and left him for...