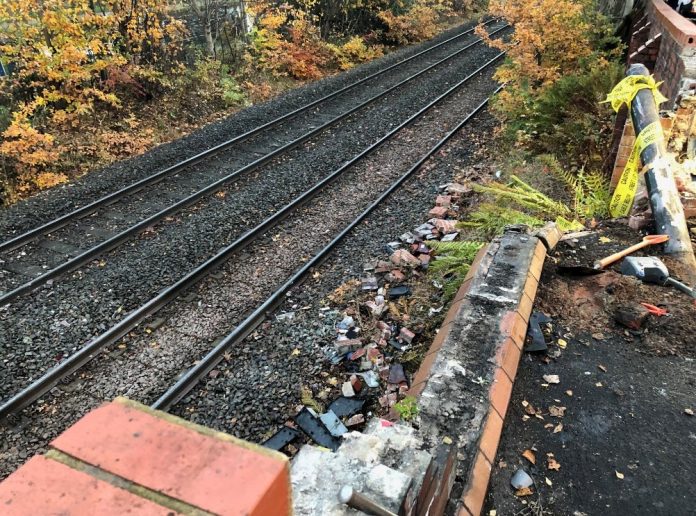 Trams between Altrincham and Old Trafford are back up and running rrently after a van left the road and hit a brick wall near Brooklands early this morning damaging the tracks and the overhead power lines.

It is understood that two people were injured when the van left the road and dropped around ten feet onto the tracks.

Earlier Danny Vaughan, Head of Metrolink at TfGM, said: “ Due to a serious road traffic collision which occurred overnight Metrolink services are currently  suspended between Altrincham and the city centre.

“It appears a van has gone through a brick wall  and dropped onto the Metrolink tracks just north of the Brooklands stop, damaging the overhead lines and blocking both the inbound and outbound tracks.

“Engineers are already on site assessing the damage to both the tracks and lines and working to resolve any issues, a crane is also on site to remove the vehicle.

“But the process of repair and recovery will take some time and as such Metrolink services on the Altrincham line will only be running to and from the Old Trafford stop until this situation is resolved.

“Extra trams are running to Sale Water Park for anyone who can access the Park and Ride site at that location and Northern Rail services are also accepting Metrolink tickets. Ticket acceptance has been put in place on the 263 bus service and we are also attempting to put extra buses on for passengers but I would advise people to allow extra time for their journeys if they use this line.

“I’d like to apologise for any inconvenience this incident may cause, we will ensure it is dealt with as quickly as possible and keep our customers updated.”