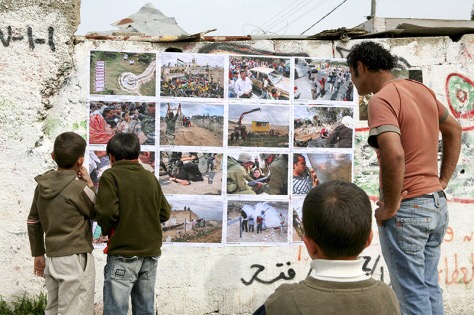 FROM selfies taken in war zones to citizen journalism from the world’s most dangerous places, a new exhibition will shed light on the photographers working in the line of fire.
Phitobomb opens on Friday, November 13, in the Holden Gallery Café Space, on Cavendish Street, Manchester.

It features a series of projections of social media and selfie images associated with war, conflict and protest from around the world, including pictures of soldiers taking selfies before going into combat, and activists’ selfies in front of police at protests.

Also showcased is the work of Activestills, a group of documentary photographers from both Israel and Palestine who encourage the creation of “street exhibitions” to commemorate the families killed in Gaza. There will also be collages made at a special workshop held today.

The exhibition has been curated by Adi Kuntsman, Lecturer in Digital Media at Manchester Met, and Simon Faulkner, Senior Lecturer in Art History at Manchester School of Art. It will run until Friday, November 20.

Dr Adi Kuntsman will also be speaking alongside Jenna Brager at an event held at No. 70 Oxford Street on Thursday, November 12, looking at selfies in areas of political turmoil, conflict and protest.

She said: “Selfie militarism, on one hand, is about the use of mobile self-portraits by soldiers on and off the battlefield to beautify their military service and to conceal and normalise its violence. On the other hand, selfie militarism is about civilians who deploy the genre of selfie solidarity, to support their army, and call for more bloodshed and more militarised assaults, using a face and a personal voice of an ordinary citizen.”

On Friday, November 13, photographers from Activestills and NARPhotos will talk about their experiences behind the lens in conflict zones, with Dr Simon Faulkner chairing the panel.

Dr Faulkner’s latest book, Between States, addresses the relationship between aesthetics and politics, focusing on the complex geography of Israel and Palestine.

He said: “Activestills and NAR Photos are both photographic collectives, one working within Israel/Palestine and the other in Turkey. They are both groups of documentary photographers, who are also activists. They are important because they represent a bringing together of photographic reportage and political activity. They do not just report protests and popular movements, but take part in them.

“Their members are also interesting because they often have different roles. They have to earn a living, but cannot usually do this from their activism. So they will sell their photographs to the mainstream news media, while also giving them free to other activists, NGOs, or displaying them in public through street exhibitions. It is this complexity of their position as photographers working between the media industry and activism that interests me. Activestills especially are linked to my on-going work on visual culture and the Israeli-Palestinian conflict.”

Home Office admits to errors over calculating the Police Budget