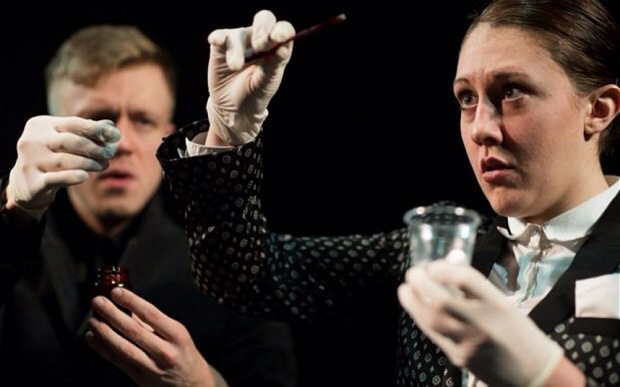 Secret Theatre, which features four new plays from four of the UK’s most exciting playwrights, arrives at Manchester’s Royal Exchange Theatre this October.

Fresh from the Lyric Hammersmith and the Edinburgh, all four pieces explore themes of love and loss, betrayal and revenge, failure and triumph and have been thrilling audiences with their brave, bold and inventive style.

In 2013 the Lyric created the Secret Theatre Company, a 20-strong ensemble of actors, directors, writers and designers brought together to explore new ways of making theatre.

Since their first provocative performance they have courted controversy and sparked debate across London. The Royal Exchange dates are part of a nationwide tour.

The four pieces are

CHAMBER PIECE (23 – 25 October) is a pitch-black comedy from up-and-coming writer Caroline Bird about power, lethal injection and the desperate need for a Twix. When an execution goes horribly wrong and the prisoner regains consciousness with no memory of his crimes the ruthlessly ambitious governor has 24-hours to prove his sanity before her death warrant expires.

GLITTERLAND (28 & 29 October) by Hayley Squires is a thrilling story of power, corruption and revenge inspired by John Webster’s THE WHITE DEVIL. The politicians and celebrities of the State of Glitterland collude to keep their people in a sedated stupor. The ruthless political advisor, Nemo, uses his starlet sister to manipulate those in power in a dangerous game of deception. As his enemies threaten to expose him, Nemo will stop at nothing in his quest for control.

A SERIES OF INCREASINGLY IMPOSSIBLE ACTS (21 October – 1 November) is devised by the Secret Theatre Company. In this riotous and uplifting show the company try to complete a series of increasingly impossible acts. With the audience in charge of who performs each night, the show will be different every night.

SHOW 6 (30 October – 1 November) is a new thriller by Mark Ravenhill which asks the question “Are you who you think you are?” The story weaves together a fatal car crash, a memory uncovered and a secret that leads to revolution.

More than 300k property transactions collapse every year due to broken chains and buyers...