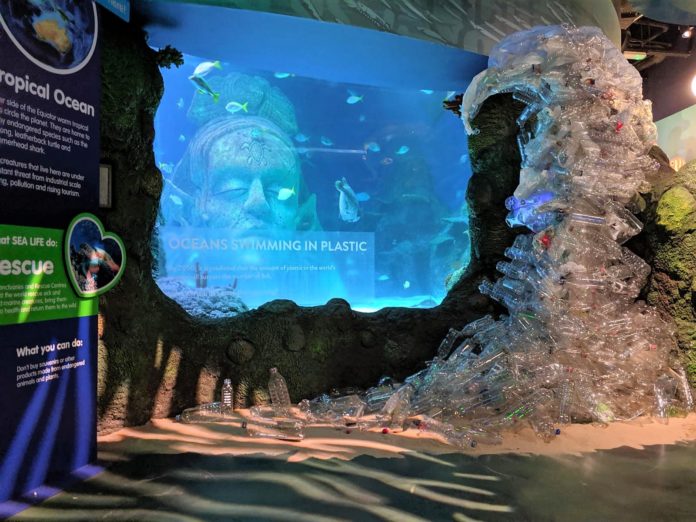 By 2050, it is predicted that the amount of plastic in the world’s oceans will surpass the number of fish.

Ahead of World Oceans Day (June 8th), Sea Life Manchester has brought the realities of plastic pollution to life. Those visiting the popular Barton Square attraction will be confronted with the unfamiliar site of a 7ft wave in front of the Ocean Tank.

Created with over 500 pieces of donated plastic the structure, built by local artist Sophie Jones-Davies, hopes to act as a visual reminder of the deteriorating state of the world’s oceans.

The devastating effects of plastic pollution can be seen first-hand at Sea Life Manchester with Giant Green Sea Turtle, Cammie. Rescued from the Cayman Islands in 2010, the creature had ingested so much plastic it had to be surgically removed. The lasting damage caused meant she would not have survived release back into the wild, so now calls the attraction’s 480,000 litre Ocean Tank home.

Speaking on the significance of the installation, Brendan Malone, Curator at Sea Life Manchester, said: “There’s a gargantuan amount of plastic in the ocean, it can be easy to underestimate the horrifying impact plastic pollution has on sea life. Turtles often mistake plastic bags for jelly fish; ocean bacteria can be poisoned by plastic, impacting the entire food chain and marine birds mistake plastic bottle caps for food, with disastrous consequences.

“We hope the structure encourages visitors to consider how they dispose of their plastic, it is estimated that less than half of all plastic bottles used are recycled and if everyone made a few small changes, it could make a huge difference to the fate of sea creatures around the world.”

Sea Life Manchester is committed to protecting the world’s oceans and the amazing marine life that lives within them. Once a month, the team invites the public to take part in local beach and canal cleans, with the aim of removing as much litter as possible from waterways throughout the North West.

In 2018, the attraction’s conservation efforts saw 152 bags of rubbish collected, with a combined weight of 366kg – almost as heavy as a Grand Piano. Along with thousands of plastic bottles, cigarette butts and crisp packets, volunteers found more unusual items, including a kitchen sink; a car fan belt; car tyres and a pineapple.

For those looking to do their part, Sea Life Manchester will be taking part in the SEA LIFE Trust’s 24 Hour Global Beach Clean on Saturday 8th June. Volunteers are invited to help clean-up Salford Quays in an effort to protect our seas and marine life from harmful plastic pollution. The clean will begin at 11am at Salford Quays. Details can be found on the attraction’s website and social media channels.

For further news on the attraction’s conservation efforts or to volunteer for the canal clean, please visit: