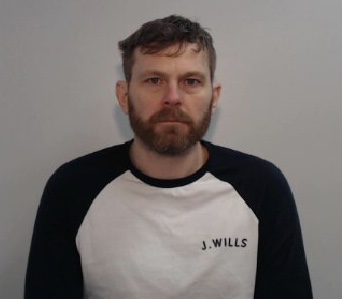 The court heard that Gareth John Skipsey Hughes,43 of Victoria Mill, Reddish was 36-years-old when he met the girl on a social media website in 2012.

Hughes posed as a 26-year-old and began a sexual relationship with the victim, he initially picked her up in his car and took her to his home address. This then turned into a regular occurrence over a period of time.

After revealing he was 36, he would often have the girl walk straight from school to his property, where they would engage in sexual activity while he filmed it on his phone.

The girl visited Hughes’ workplace in Reddish, where he showed her a file on his computer containing explicit videos and photos he’d taken of her.

The relationship continued until she was 19 when she moved away from the area.

He was arrested in November 2016 after the girl reported the relationship to police.

Hughes’ computer was found to contain dozens of sexual conversations with young girls, as well as specialist software that attempted to hide his online activities.

After failing to answer police bail, Hughes went on the run.

He was traced and arrested at his workplace in London in January 2019.

Detective Constable Jon Greenslade of GMP’s Stockport Division said: “Hughes is a predatory paedophile who targeted a young girl less than half his age.

“He was fully aware of the girl’s age but decided to pursue the relationship nevertheless – making indecent pictures and videos of her.

“His electronic devices contained numerous chat logs with many young females from different countries who he had engaged in sexual conversations with.

“After being arrested, he attempted to avoid prosecution – he used numerous phone numbers, rented a flat in false name and began working in short term contracted jobs all over the country.

“But ultimately he could not evade justice and today he’s had to answer for his past behaviour.

“We hope today’s sentence provides closure for his victims and I want to praise them for coming forward.”