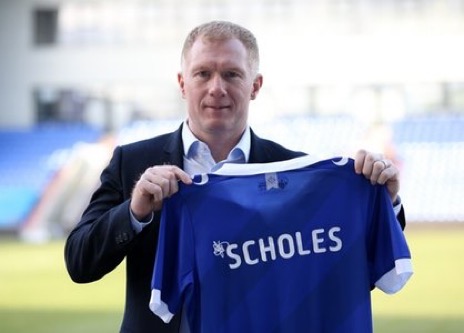 Oldham Manager Paul Scholes has resigned from the club after just a month in charge of the League Two Club.

In a statement the former Manchester United Midfielder said:

“It is with great regret that I have decided to leave the club with immediate effect.

The fans, players, my friends and family all knew how proud and excited I was to take this role.

In the short period since I took on the role it unfortunately became clear that I would not be able to operate as I intended and was led to believe prior to taking on the role” adding:

I wish the fans, the players and the staff – who have been tremendous – all the best for the rest of the season and will continue to watch and support the club as a fan.”

He was in charge for just seven games, winning only one.

We would like to place on record our thanks to Paul for his efforts during his spell in charge of the club and would like to wish him well for the future.

An update on the permanent replacement will be made as soon as possible.

1966 World Cup Final to air on Channel 4 in support of National Emergencies...