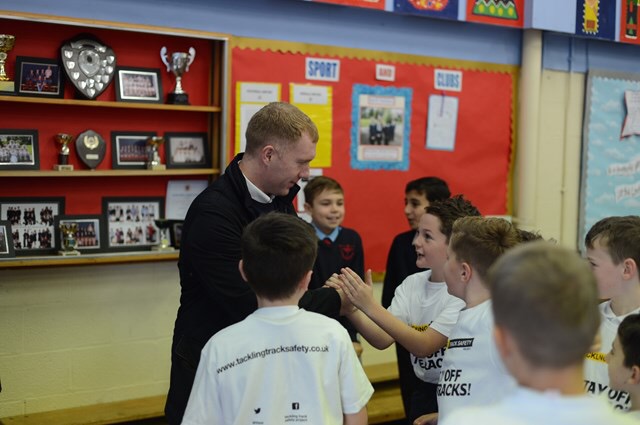 Salford City FC co-owner and former Manchester United and England superstar Paul Scholes has helped launch a new railway safety initiative which aims to cut the number of young people who are killed or injured after trespassing on the railway.
Over the past 10 years, more than 360 people have lost their lives while trespassing on the railway with almost half of these young people under 25.

To help save lives and prevent traumatic and often life-changing injuries, Network Rail is teaming up with local professional or community sports clubs and schools across the country, to deliver a fun and engaging new programme teaching kids how to stay safe away around the railway.

Class of ’92 legend Paul Scholes recently attended a session at Christ the King RC Primary School in Walkden, Manchester. The school is one of more than 100 that will take part in the ‘Tackling Track Safety’ programme which has been developed and is delivered by PDF Sports, a Manchester-based company with a track record in delivering sports education projects.

They will target more than 100 schools across Britain in around a dozen trespass hotspot areas with the aim to reinforce the educational messages regularly through a person’s school life to discourage trespass and reduce the number of incidents.

Scholes spoke about why Salford City FC wants to be involved in such projects. He said: “Our club is a big part of the community and we want to work with schools and Network Rail to help make young people aware of the injuries that can happen and the dangers of playing on the railway. It was great to see how football can help drive home those important safety messages and if Salford City FC can help prevent one more injury, then we’re winners all round.”

Graham Hopkins, Network Rail director of safety, said: “Britain has the safest railway in Europe but still too many people lose their lives on the tracks. As the railway gets busier and we electrify more lines to improve services, we must work harder to keep young people safe by making them aware of the dangers that exist. Taking a short cut or messing around on the tracks can result in serious life-changing injuries or death.

“Together with PDF Sports we have developed a fantastic new curriculum-based programme which combines classroom learning and sports activities. We know that having superstars and coaches from clubs like Salford City FC helps inspire and engage the kids and really drives home the important safety messages which are designed to keep them safe.”