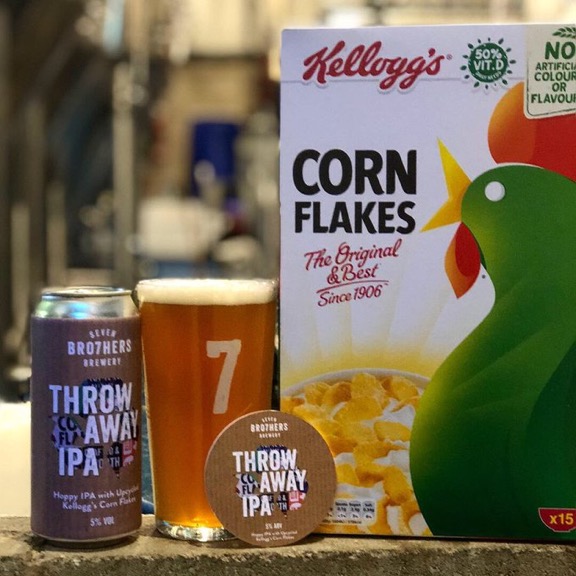 A Salford Brewer has teamed up with Kelloggs to make a beer using disguarded cornflakes.

Seven Bro7hers turns Kellogg’s Corn Flakes into ‘Throw Away IPA’ using flakes considered too big , small or overcooked to make it into packs.

The flakes would ordinarily go to animal feed, but now replace some of the wheat grain in the beer mix, during the ‘mash’ process and sweetens the taste.

The IPA, which is “cornflake golden” in colour, is also helping foot distribution charity FareShare, as 10p from each can purchased will be donated to the cause.

Corporate social responsibility manager for Kellogg’s UK, Kate Prince, said: “Kellogg’s is always exploring different and sustainable ways to reduce food waste in its factories. So it is great to be involved in such a fun initiative with a local supplier.

“Kellogg’s is working hard to eliminate food waste in our manufacturing processes and give our consumers the wholesome products they love with minimum impact on the planet. Our approach has delivered a 12.5 per cent reduction on food waste in our UK sites this year.”

“Kellogg recognises that it has an important role to play in reducing food waste, and that includes finding uses for edible food that doesn’t make it into the cereal box. The cereal is perfectly safe to eat but the flakes might be too big, too small or broken so not good enough for our packs.